Who are the Turners or a Turnverein?
Friedrich Ludwig Jahn (1778-1852) founded the Turner movement in Germany as a half-secret paramilitary training facility for resistance fighters against the Napoleonic occupation. Shocked by the poor physical condition of the soldiers during the Napoleonic war, Jahn devised a system of exercises and games to help improve a person’s strength and stamina.

The Turners were trained not only in running, jumping, swimming, and weight-lifting, but also in the martial arts such as fencing, shooting, and even bayonet-fencing. He also invented much of today's gymnastic equipment. Thus, he is credited with the invention of the sport of gymnastics.

The Turnverein, from their very beginning, were gathering places for German radical democrats. The Turners were a constant threat to the nobility and were ardent fighters for the Republic. They joined, and even started, many revolutionary uprisings in all the various German-speaking countries.

In 1848, when the German revolution took place, many of these Turnvereins were in existence. The failure of this revolution caused many Germans to immigrate to the United States. Once here the Turnvereins were quickly started. The one in Cincinnati, which was founded in 1848, became the USA’s first one.

The most famous Turner from the Cincinnati area was President and Chief Justice of the United States William Howard Taft. Whenever President Lincoln traveled, the country Turners would gather to serve as guards much like the Secret Service does today. The Turners still exist today; they moved out of Turner Hall on Walnut St. in the 1950s and are now are located on Pinney Lane in Springfield Township.

Mike Boylan adds:  There was a Turners Hall in Covington, almost directly across the street from the Anchor Grill on the old Dixie Highway (we may doze but we never close) as recently as the mid 2000s.

What was the Colored YMCA?
In 1910, 25 African American YMCAs were built in 23 cities as a result of a challenge grant program announced by Sears Roebuck founder Julius Rosenwald. Rosenwald donated $25,000 toward the cost and an additional $50,000 came from Cincinnati’s white community. The Ys included clean, safe dorm rooms and eating facilities, which were a boon to African American travelers, especially servicemen, in a segregated and discriminatory era. The Cincinnati facility was the Ninth Street YMCA.

In 1916 sprinter Fred Stormer of the Cincinnati YMCA was probably the most accomplished runner in the Cincinnati area. Stormer surprised the close followers of athletics by finishing second in the 1915 summer junior national quarter-mile championship at San Francisco.

UC
UC placed second to Ohio State at the Spring Carson Field Meet. They competed on the track, which encircled the inside of Nippert Stadium. The track disappeared in 1936 when Carson Field was lowered 12 feet (3.7 m) to allow for the stadium’s seating capacity to expand from 12,000 to 24,000.

Of interest was a new WWI era event called the Grenade.  See the following explanation and Big Six Records below.

An unorthodox addition to the July track and field events competition at the Inter-Allied Games, which was held at the Stade Pershing in Paris, France, was the hand grenade throwing competition. The event was open to all military personnel from countries that were among the Allies of World War 1.

At the Allied Games, the event consisted of throwing for distance rather than accuracy. The winning distance of 245 feet and 11 inches, set by American military chaplain Fred Thomson, was declared a new world record. 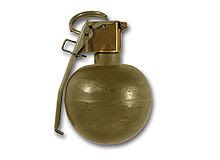 M67 fragmentation grenade, a hand grenade developed in the US 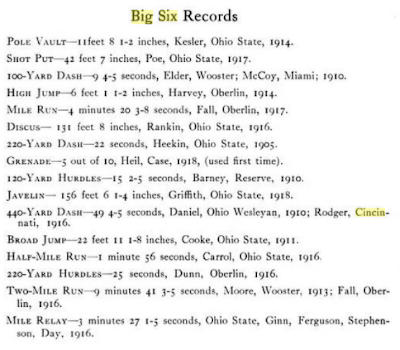 Walking
Sebastian Linehan, a top race walker of the day, founded the local chapter of the American Walkers Association (AWA) in 1916. By the end of the decade, of all the AWA chapters nationwide, Cincinnati’s had the greatest attendance. The organization is still active today and meets weekly for walks around the area.

Click this link for information about the group
https://www.meetup.com/american-walkers/

Over the years Linehan proved to be an outstanding promoter of the sport as well as a superb athlete.

Each of the local walking groups, which existed at the time, hosted regular hikes during the weekends. The following article is an example of an invitation to the general public. The clipping demonstrates other activities, which they engaged in while hiking. 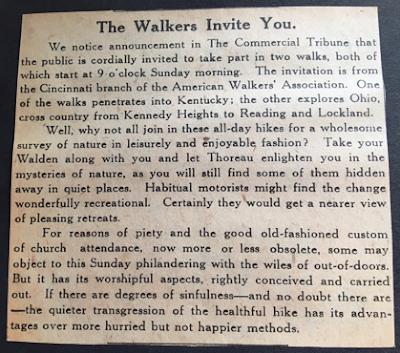 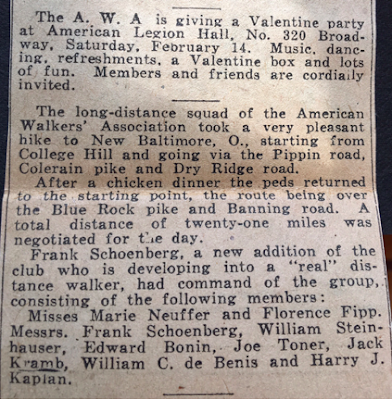 Walking was so popular that there was a regular column in the local newspaper entitled “With the Hikers.” The paper described their weekly jaunts, which varied from 6 to 28 miles. 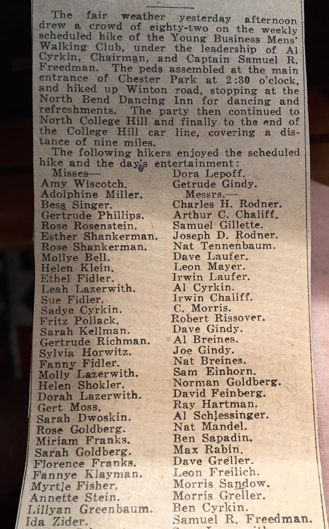 The majority of the walks were co-ed. Mention was made of relationships that developed as a result of the many hours spent together. 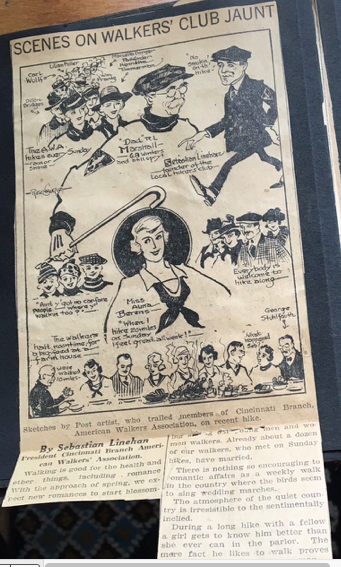 1917
High School
Lee Roy, a student at Woodward High School, set the all time Ohio high school record for the indoor 50-yard dash.  He did this on February 10 at the YMCA Midwinter Carnival at the Cincinnati Armory.  His time was 5.8 seconds.

Club
On April 6, the U.S. entered World War I.  For three years, during the war and its aftermath, club teams were depleted as many men joined the service.

UC
Oliver Nikoloff came to the University of Cincinnati. He was to become the longest tenured track and field coach at UC (1917-1959).  He taught and coached (basketball, tennis, track and field, and cross-country) at UC for 42 years.  There was a time when Nick and the Athletic Director (AD) were the entire UC athletic department. A current annual track meet, named after him, is held on campus each spring. During World War II, the Bearcats did not field a team, so Coach Nikoloff trained soldiers for the U.S. Army instead. 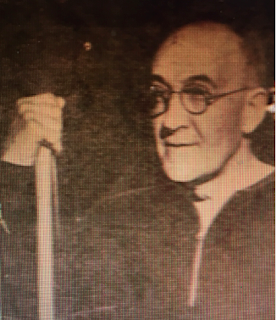 High School
During the outdoor high school track and field season, Norwood High School established the Ohio state record for the Mile Relay. The time was 3:35.? Albert Ficks was one of the members on that team. His teammates’ names are unknown.

1918
UC
UC recorded its first conference championship team. The team defeated the Bishops from Ohio Wesleyan as they won the Ohio Intercollegiate Cross Country Championships for the first time.

1919
Club
In March the Gym continued its strong showings in meets by defeating the University of Cincinnati and the YMCA in a triangular indoor meet at the Central YMCA.

UC
Cincinnati placed first in an indoor triangular meet. When they moved outdoors, they also beat Ohio Wesleyan for the second year in the row. The Bearcats tied for fourth in the outdoor Big Six Meet.

Walking
Since walking was such a popular activity, articles devoted to hikers and the locales that they visited appeared in the Enquirer and other newspapers each week. These accounts noted rosters of the participants and a description of the walks. A large turnout was typically present on any given weekend. 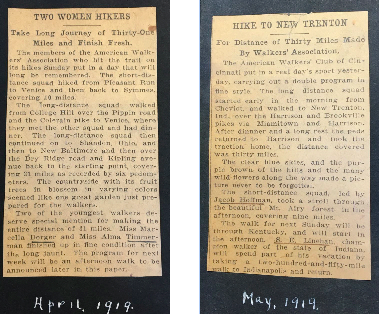 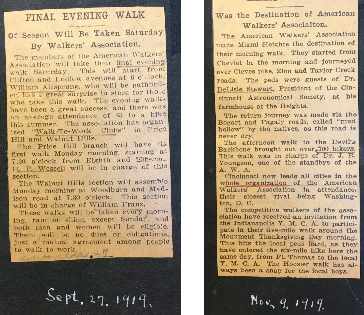 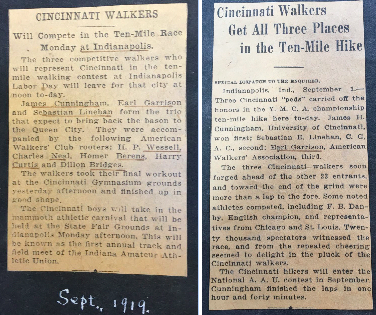 Rules for Race Walking
Race walking received quite a bit of attention at that time.  In order that everyone abided by the same standards, the appropriate race walking rules were published.

Thanksgiving Day Race Articles
In 1919, with WWI completed, the Thanksgiving Day Race resumed on a new route. Now it linked the Ft. Thomas Armory to the Central YMCA, which was at the corner of Elm and Canal. News articles mention that one needed to pass a physician’s test in order to participate.  The field consisted of 19 runners and nine walkers.

Handicap starts were utilized and Frank Martin of Chicago, official handicapper of the Amateur Athletic Union (AAU), did the honors. 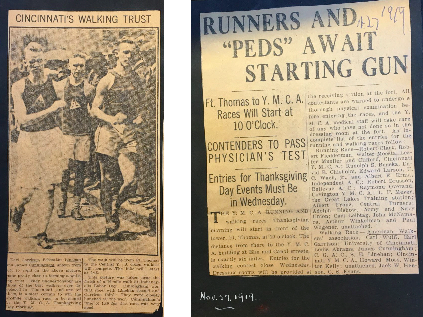 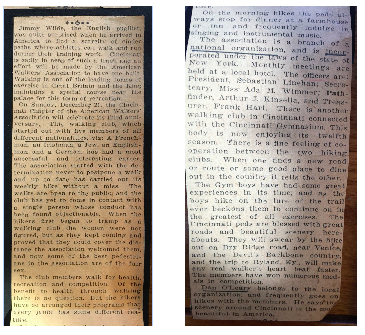 In order to celebrate the 100th Anniversary of the organization, the AWA hosted a Birthday/Christmas luncheon on December 3, 2016 at St. Peter & St. Paul United Church of Christ, which is located on the southwest corner of Queen City Avenue and Ferguson Road.
Posted by Bob Roncker at 9:02 AM 9 comments: