Here is the final installment of local marathons that took place before the inaugural 1999 Flying Pig Marathon.

In 1980 Phidippides, (named after the early Greek marathoner), a national chain of about 60 franchised specialty-running stores existed. 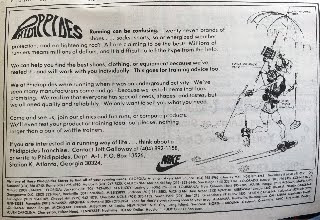 Jeff Galloway was one of the owners of the chain and Bob Roncker was a part owner, with two other individuals, of the Cincinnati franchise. The original store was located at the corner of Madison and Edwards in Hyde Park next to the current Hitching Post.  A second store was in Cherry Grove on Beechmont Avenue.


Galloway's idea was to have all the stores offer a Last Chance Marathon for the Boston Marathon on March 1, 1980. This was the last weekend that the Boston Athletic Association, BAA, which owns the marathon, was allowing people to qualify for that year’s event. Due to unusual circumstances, two marathons were staged on back-to-back weekends in early March 1980 at Mt. Airy Forest.

Bob Roncker established a fully certified course in Mount Airy Forest. It started and ended near the Oval on the left fork off of Colerain Avenue. One full route of the loop, including the side branches, was about 3½ miles. It was to be repeated over seven plus times.

On the afternoon before, when the finish line chutes and mile markers were being set up, the weather looked beautiful. However, a freak storm, which none of the weather analyst forecast, appeared that evening. Not only did it affect Cincinnati, but this storm also caught the entire Eastern Seaboard by surprise. Locally it dumped over a foot of snow and the temperature plummeted to around 15°.

Roncker awoke at 5:00 a.m. to pick up an out of town runner who was arriving at the bus depot downtown. While driving down, Roncker saw what the road conditions were like. He was concerned that anyone trying to arrive at the course might have an accident. He called the local media stations around 6:00 a.m. and asked them to make announcements that the race he had been postponed or canceled.

But, you know how runners are. If hell and high water can't stop them, a foot of snow surely won't. And it didn't. Well, he got a phone call about 9:00 a.m. from a group that came down from Michigan and they wanted to run a race. They were already at the park, braving the elements, and ready to go. Roncker said that he would come over and set them off.

Upon arriving at Mt. Airy, Roncker set out the mile and other markers to help guide the runners. Since a foot of virgin snow covered everything, you could not tell where pavement or earth was underneath. Ten individuals started, nearly all of whom finished. As a result of this race, Roncker claims a record in race directing annuls.

Single-handedly he directed and administered a fully certified marathon race. He served as the starter, gave out fluids (until the water froze), recorded all the finishers, and passed out awards. We won’t say that conditions were arctic-like, but during the course of the event, two separate dog sled teams passed by.

Permission was granted by the Boston Athletic Association to extend the qualifying period one more week. The next weekend the sun was out, the snow was gone, the temperature was up, and another race, with about 150 runners, was held over the exact same course. Some even had their shirts off. Unfortunately records of this event have disappeared. 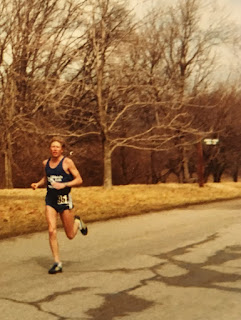 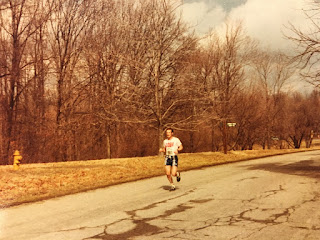 A runner in Mt. Airy Forest 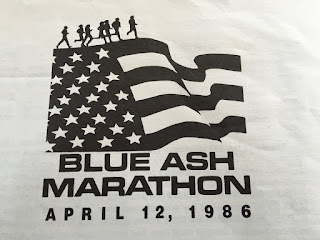 In 1986, under the guidance of Kriste Dick (Lindenmeyer) and the Clifton Track Club, the Blue Ash Marathon along with its half marathon component began. This event continued for eight years in total. 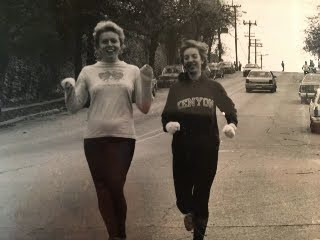 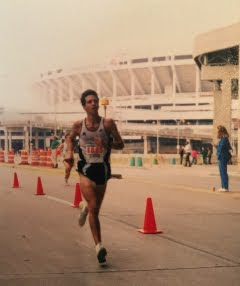 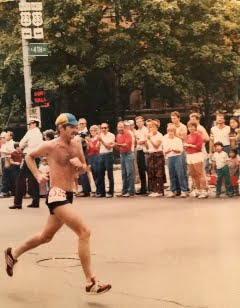 Dianne Rappaport was the female winner of the inaugural event. The timer stopped at 3:15:36 for her. 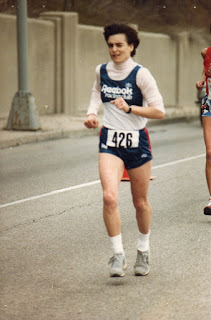 The half always outdrew the full marathon. Each year around 350 individuals entered the half while there were never more than 70 who started the 26.2 mile distance.

After eight years, why does a marathon stop? The final year for this particular event was 1993. Marvin Thompson, the Blue Ash City Manager at the time, stated that they did not want to close the city’s recreation facilities for a good part of the day. Since traffic logistics also became a problem, the decision to terminate the event was made. That was the last local marathon until the Flying Pig started soaring in 1999. 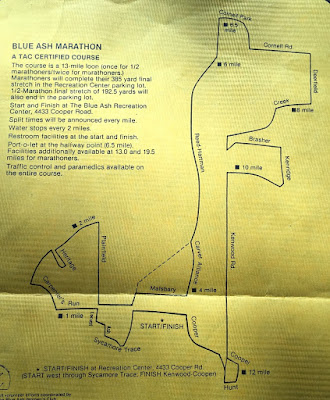 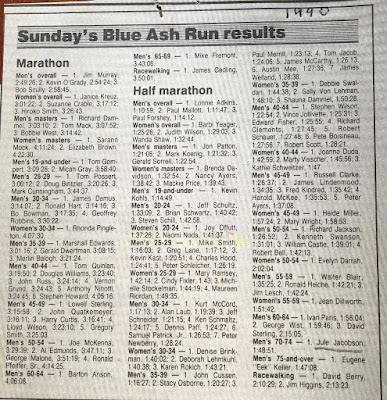 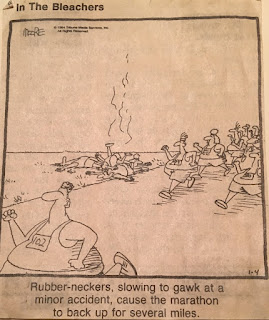 Posted by Bob Roncker at 3:22 AM No comments:

Here is a continuation of local marathons that took place before the inaugural Flying Pig Marathon in 1999. 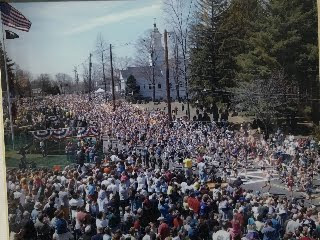 On December 2, 1978 the Clifton Track Club (CTC) hosted its first and only Boston marathon-qualifying race for its members around Lunken. One loop around the airport and playfield was about 5½ miles. The distance was certified in order to make it a true qualifying event. 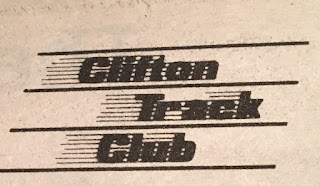 The race began on Wilmer Avenue under an overcast sky with a temperature in the low 40s. As time progressed, a light rain began to fall and the temperature dipped into the high 30s. 24 individuals finished the full distance while 18 bailed out before completing the entire route. 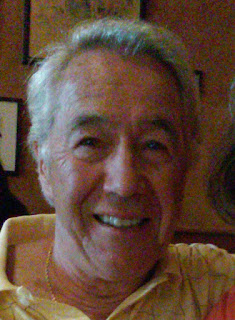 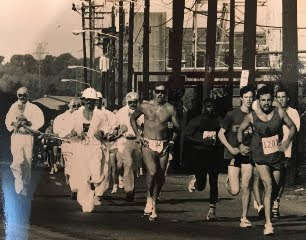 Dick Dammel – without shirt and sunglasses

Breaking three hours was a goal for many people since that is what Open Division individuals (under 40) needed in order to qualify for Boston. Bill McLaughlin and Gary Keuffer placed 4th and 5th while Dennis Geiger was the last person to sneak under that desired 3:00:00 mark as he finished in sixth place with a time of 2:59:24. 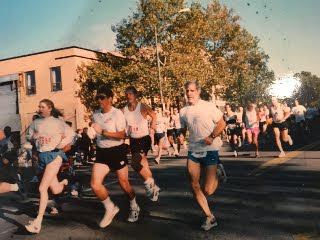 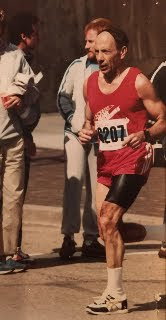 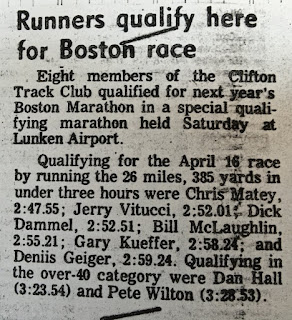 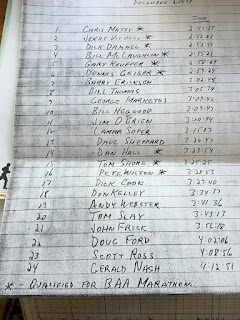 In 1979 the Covington Wade YMCA started hosting marathons under the direction of the dynamic Scott Miller. Miller, who worked for the YMCA in Covington, was also a very fast runner. Along with the Y, Sporting Foot & Things and the Pacemakers Running Club helped sponsor the event. 342 runners were pre-registered that first year. In 1979 it was necessary to run a sub 2:50 marathon if you were in the Open Division (39 and under) and wished to be eligible for Boston. Masters division qualifiers (40 and over) needed to finish within three hours and 10 minutes.  You can see that the standards differed quite a bit from what is required now. 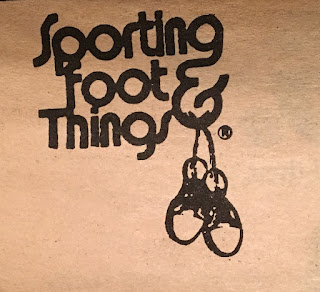 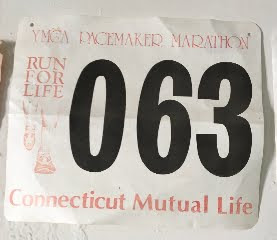 The race started and ended at the Wade YMCA branch on Madison and Pike Streets in Covington. It headed west on Route 8, turned around at the 13.1 mark, and came back the same way. The course description for mile 13, by Father Dale Peterka, is as follows, "look for a nice A-frame under construction on your left, another view of the river, a houseboat on blocks, and a howitzer!!"

It was warm that first day and the heat affected the runners. The temperature was in the 70s at race time. The field consisted of 425 people. Gary Rizzo won the first Pacemaker Marathon with a time of 2:39:08. Pat Crowley was runner-up. His time was 2:42:21. 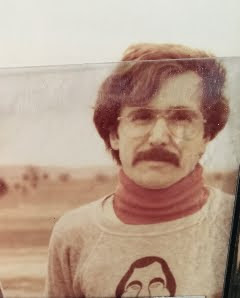 23-year-old Karen Doppes-Cosgrove's time of 2:48:23 led all women as she placed 8th overall. She has been running for only two years. During that time she already had completed a number of marathons. 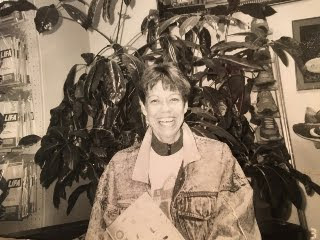 Miller, in his next newsletter for the Pacemakers Running Club following the marathon, expressed an attitude held by many runners that was common at that time (the 70s represented the first running boom), "Let this event serve as a reminder to area politicians that us health–freaks (!) are many in number and our events will continue to grow in number and importance. We runners are here for good (and I mean GOOD)." 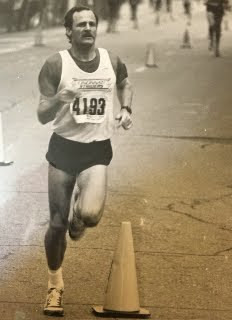 In 1980 the course was altered to begin at Ludlow High School on Route 8. This change of the start’s location eliminated the major hill that confronted runners at mile 24. The course still proceeded westward towards a turnaround point that was located approximately four miles west of Taylorsport and across the Ohio River from Sayler Park. The route consisted of rolling hills along the scenic riverside. The early registration fee was six dollars.

In year two, Gary Rizzo repeated as the winner while lowering his course record to 2:29:38.

Mackie Price, in the second year, placed first for women with a time of 3:16:52. 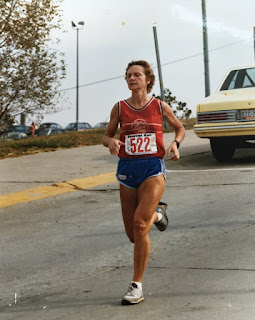 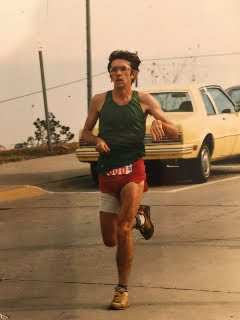 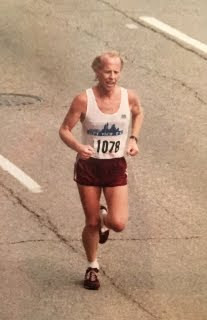 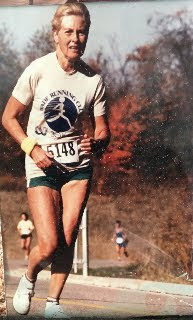 With the termination of the Wade YMCA Pacemaker Marathon, area residents had no local marathon until the Blue Ash Marathon was born in 1986. 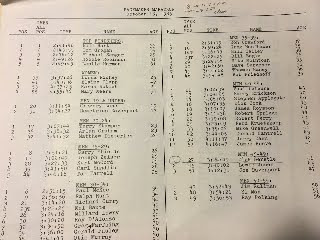 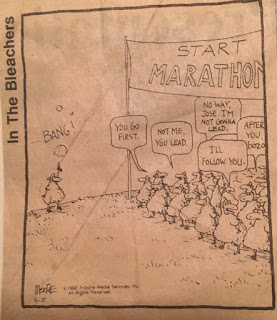 Posted by Bob Roncker at 6:59 PM No comments: