V. 1 #10 Some Notes on the Origin of the Flying Pig Marathon and How It Grew

May 1 marks the 18th annual Flying Pig Marathon take off. First run in 1999, the final year of the 20th century introduction of this event was an extraordinary addition for the community. Although other local marathons previously took place, none approached the scope of what has simply become known as The Pig. 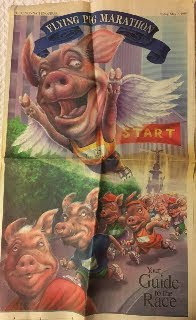 To this, we owe a debt of gratitude to Bob Coghlin for visualizing and founding the Flying Pig Marathon. This month’s blogs look at the beginning of the Pig and other past area marathons.

V. 1  #10  Some Notes on the Origin of the Flying Pig Marathon and How It Grew

Runners come up to me all the time and compliment me on the Flying Pig Marathon, and how I founded it.  False!  I was the Executive Director of the Inaugural Marathon, but I had nothing to do with its founding.  All of that credit belongs to Bob Coughlin, a determined guy if there ever was one, who put his money where his ambitions were, and made it possible. 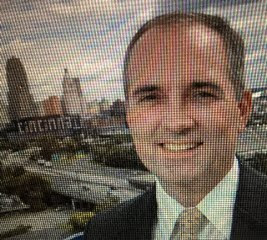 This "account" of the founding is hearsay, since I was not present, but I think it is accurate.  Bob Coughlin founded a payroll services company, Paycor.  He didn’t start running regularly until he was age 33 when he joined the Leukemia & Lymphoma Society’s Team-In-Training.  He became very involved with TNT as a board member and then, like many of us, he thought a Cincinnati marathon would be a great idea.   The difference was that Bob was willing to invest his time, talent and money to make it happen.  In the beginning, that was $50,000 along with so many donated services that it is still incredible to comprehend.   By the time I was lured into getting involved, Bob had been working on it for two years and had amassed the handsome sum of $150,000 in major sponsorship hard dollars (eventually he raised $450,000).  Not in-kind services, but real dollars.  That was, at the time, a huge help in overcoming the many obstacles to planning, gaining approvals and executing a new marathon on the streets of Cincinnati and northern Kentucky. 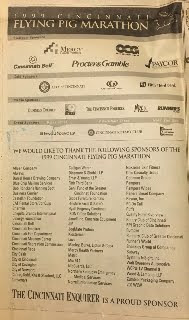 I was initially lured to be on the advisory board.   One of the first major tasks was to find both a race director and an executive director.   Rich Williams had been identified as a race director, and he was in the process of leaving the Columbus Marathon.   However, Rich knew virtually no one in Cincinnati, and was going to need help negotiating through a Cincinnati city bureaucracy that was not in the least interested in allowing the closure of Cincinnati streets on a Mother's Day Sunday morning. 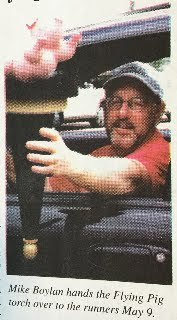 Through some very fortuitous events, it eventually occurred to me that I could leave my law practice for the 14 months that were required, and that I had been unwittingly training for many years to be the executive director.  And so, in April 1998 I took a leave of absence and went from a nice comfortable office and support staff to a donated office from Paycor, a single computer terminal and set to work.  I had no staff, no entries, a fledgling web site, no real budget, and no operations manual.  Gulp!

Support from everyone and everywhere.   Every one I knew -- and everyone I encountered -- was so supportive, it made my runner's heart so glad!   David Mann, a long time runner and City Councilman, helped so much to get us through obstacles with the City.   With much help, we put together a great board.   Roger Ach, who knew or seemed to know everyone, and had some brass balls, got us in to many many doors that I had no idea how to open.  Denise Hovey, a "part time" volunteer, in essence became the Volunteer Coordinator.   Iris Simpson, now the Marathon Executive Director, was so instrumental in coordinating the television promotion with Channel 5, where she was sales director.

The magical poster and box --- a huge assist in local promotion and a totally unique runner goodie at the time -- was designed and donated entirely free of charge by Ed Zumbiel and his Norwood box company.  Think of that, 8000 free glossy posters, each in a box, delivered free!

Paycor received and processed all of the mail entries for the marathon, free. Jim Bush, owner of City Dash delivery service, gave us free storage for race gear and free delivery wherever and whenever we needed it.  Many many others helped out, and it made it a great pleasure to be so supported by the community. 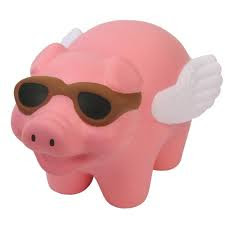 Runners World makes us famous.  The big breakthrough with Runners World deserves mention.   Runners World was and is still the Bible for road racing.  How we could get the attention of Runners World was beyond my modest abilities?  It was entirely luck and that little squeeze-toy flying pig that did the trick.  Rich Williams and I journeyed to Chicago for the LaSalle Bank Chicago Marathon for the fall 1998 marathon, where we had a modest booth.  I took along about 250 of the squeeze toys as giveaways.  Soon chaos erupted at our booth; everyone wanted a flying pig!  So we began having an hourly raffle to ration our pigs.

At some point a few guys I didn't know asked for some pigs. Rich whispered "That's Runners World, give them as many as they want."   What we did do was offer to bring some by the Runners World booth later, where we chatted up the race.   That led to us getting invited to the LaSalle Bank and a huge buffet bash for sponsors, elite runners, and journalists, and we took three-dozen pigs with us.  The LaSalle folks didn't appreciate it, but we worked that room with our pigs, and we had Runners World intrigued.   This eventually led to Runners World coming to cover the first Marathon; and, later, its incredible ranking of the Flying Pig as a Top 10 US Marathon.

Volunteers.   The task of recruiting volunteers was a tough one.   I had been raising volunteers for running events since 1968, and I knew enough to prepare a volunteer "budget."  When I totaled it up, I discovered I needed over 2000 volunteer "days".  Gulp again.  Initially, when I received calls from groups who wanted to raise money, I had told the callers that Team-In-Training was our official charity sponsor, and they could not use the Marathon name.  After computing that I would have to find 2000 volunteers that changed quickly.   Because we were determined to have fluids at every mile of the course, we hit upon finding groups to man each water stop. We decided to train each group to have leaders with correct technique for stacking cups of water and Gatorade, how to offer a cup without stepping in the way, and how to clean up afterwards.   We were able to find enough in our budget to offer each group $500 to successfully manage a water stop.   The diversity of the groups we recruited also (unexpectedly) helped us with many other issues that arose, including the course route.  Those groups now fiercely "own" those fluid stops 16 years later.

How I designed and certified a course and lived to tell about it.   Every race worth it's salt has a certified course.   Certifying a course is not a matter of driving it in your car, or even with a bike and a digital odometer.  In the late 1990s it was an elaborate multi-measurement ritual that required a great deal of documentation.   Although Don Connolly, certifier extraordinaire, offered me a great deal of assistance, it proved to be daunting.

Designing a course that would be visually appealing and not entirely composed of hills was another problem.   I made a few mistakes along the way, to be sure.  Foremost, the course traversed Wilmer Avenue near Lunken Airport.  I thought that the entire road had been approved.  However, the Fire Station at Lunken could not be "landlocked” for an extended period. On the day of the race what I thought was two lanes of space for runners was narrowed to only one lane - not very much fun for the middle of the pack runners at mile 18.  The last miles of the course were at least flat along Eastern Avenue, but they were unshaded. 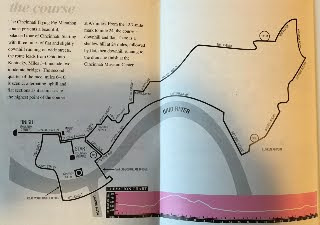 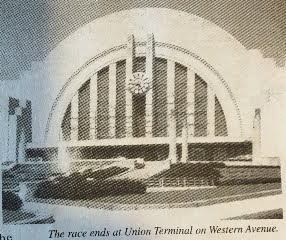 The finish line at the Museum Center was very picturesque, but presented major access issues for the estimated 15,000 spectators there to see their runners.  Oh, and there were no soft spots for the finishing runners to lie down or just sit....just parking lot asphalt.

Anticipating Race Day Problems.  The biggest course problem was that the route passed directly by or very near 40 churches -- on Mothers Day.  For some churches, notably St. Michael's on Ezzard Charles Drive, Mothers Day was the biggest attendance of the year, and a major fund-raising breakfast was imperiled.  St. Rose on Eastern Avenue would be virtually landlocked for an entire Sunday morning.   To head off this problem, many many hours of visits to the churches and pastors were required.  The two Sundays before the Marathon, we were out papering windshields with gentle appeals to support the Marathon, along with warnings about how traffic would be affected.  Nearly every community center and neighborhood association got a visit from our staff to promote "parties" along the course, with the subtext to warn every resident in advance that there might be inconvenience on race day.   All of that pre-race work payed off.  There were a few angry letters before the race, but on race day most people knew the runners were coming, and the City received no complaints.

Now, the City has embraced the Marathon, and all along the course support is evident.  But in the beginning, we were very worried about backlash.

The Results were amazing.   The race itself went out with only minor hitches.   Considering that 2/3 of the runners were "virgins" running a first marathon ever, the finishing percentage of 96% was very satisfying.  On a beautiful cloudless Cincinnati morning, the fluid stops, the entertainment zones and all of the spectators on course kept up the spirits of the runners.  Our satisfaction ratings were tops.  Our medal was and is the envy of all. 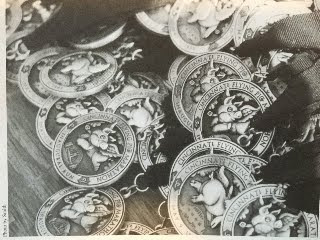 Our goodies were top shelf, and that made a very good impression on the runners and the road running press.  Our volunteer base in the community is well established, and has grown from 30 groups for the first Marathon to almost a hundred for recent editions.  It was one of the proudest moments of my long life with runners and my many years in Cincinnati.