"If you can't find it elsewhere, create your own competition."

Don Wahle said these words on July 3, 1966 in response to an Enquirer staff reporter as he was being interviewed during a summer track meet series that he helped form. Those words typify Don’s attitude toward life. If something needs to be done, and no one else is doing it, then you can be the person to initiate it.

Many of you are aware that on January 22, 2016 we had a “Gentle Roast” for Don Wahle at Sorrento’s in Norwood.  It was a small way to help repay him for all that he has done for the local running community.

Out of this gathering came the idea to compile and assemble a history of local running and walking during the 20th century.  If you have a story to tell which will add to our local history, please share it with me and if appropriate we will post it.
May the wind always be at your back.

V. 1 #2   Memories from the First Heart Mini-Marathon
by Bob Roncker

The Heart Mini-Marathon takes place in less than two weeks from now. This was the first big-time road race in Cincinnati. Sure, the Thanksgiving Day Race is much older but in the late 1970s its attendance was just a few hundred at the time. 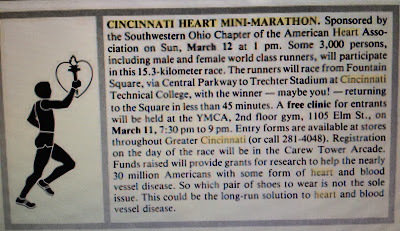 The Heart Mini changed that. The race organizers brought in some of the top male and female participants in the country and they hosted a clinic for the participants. The clinic was held at the Central YMCA the night before the race. The atmosphere there was electric. Over 3000 people had unexpectedly signed up. The running boom of the 1970s was taking place around the country and Cincinnati was now ready to join it.

The course that year differed from what it is now. The starting point was the corner of Fifth and Vine. Once the gun sounded, everyone headed northCentral Parkway. A left on the Parkway pointed the runners to what is now Cincinnati State College. After a tour around campus, the herd returned along the same route. A right turn on Walnut with a finish near 6th St. completed the 15 K distance. 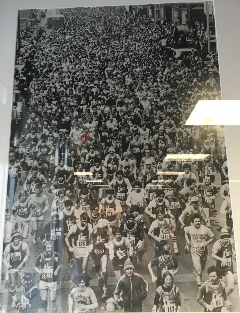 Prior to the start of the, the Arcade in the Carew Tower was jammed with excited participants. Then, as the race time approached, everyone went out and positioned himself or herself on Vine Street.  Since I was up near the front, I did not have a true sense of how many people were actually participating. The race turnout became quite evident to me after I ran around Cincinnati State's campus and started the return journey on Central Parkway. I was amazed. Runners just kept coming and coming from the direction of downtown.  At that time I had been running for about twenty years and I had never witnessed a crowd like that at any of our local events.

That was the only year that the Central Parkway route was used. It had to be discarded because of the concern for possibly impeding ambulances arriving from the west side of town and heading toward one of the hospitals on Pill Hill. 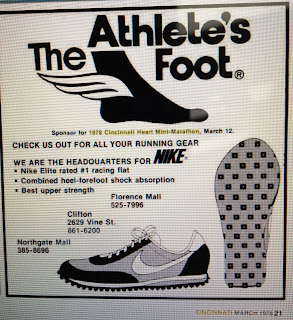 Once back in town the runners turned right off of the Parkway onto Walnut Street. There they headed south and finished near 6th St., or so they thought. That is material for another story.

This was the first time that any of our area races computerized the finish results. The computers of that era were slow and the wait in the Convention Center was lengthy, but I don't think anyone minded. The excitement generated by this event overcame any shortcomings. We realized that with this big-time race, running in Cincinnati had arrived.