Runners from Greater Cincinnati owe a lot to Don Wahle.  A two-piece series attempts to give an idea of what he has done. The first installment focuses on his competitive years while in school.

Many of the photos were researched and obtained by Russ McMahon.

Don originally lived in Bellevue, Kentucky. However, when he was five they moved to Cincinnati in order to take advantage of Children’s Hospital. From an early age Don had poor vision. He went to Heberle Elementary and Shields Middle Schools where they had Sight Savers programs.  Later, he attended Hughes High School to be in their Sight Savers program, but the instructor recently retired and was not replaced. During his seventh and eighth-grade years he lived on Stratford Avenue in Clifton Heights, which is off of McMillan and not far from Shields. Then, during high school his family moved to Vestry, which is by Straight Street and near both Hughes and UC.

When Don started at Hughes, his dream, much like that of other students at the time, was to be a baseball player. However, he knew that because he did not have much success in Knothole baseball, the chances were slim that he would make the team at Hughes. Coach Paul Reichert noticed him running in gym class and encouraged him to come out for the track squad. It took a while for coach's prodding to succeed, but finally Don came out for track during his freshman year. The team practiced at Coy Field, which had a 150-yard straight away that the sprinters could use. Distance runners would encircle the field and the parking lot. During cross-country season, they did much of their practicing at Burnet Woods, which adjoined the University of Cincinnati campus.

Hughes’ coach was veteran Paul Reichert who, much like Oliver Nikoloff, Don’s future mentor at UC, was very upbeat and never criticized the athletes. Over the years Reichert's gym teams were highly successful. Reichert had a number of good track athletes. Roger Moore was one of these. He broke 10 seconds for the 100-yard dash. Then, when he went to Miami, he was moved up to the 440 where he became a nemesis for UC’s top 440 runner, Bob MacVeigh. Both Wahle and teammate Jack Heinemann liked Coach Reichert on account of his enthusiasm and motivating ability.

Don qualified for the State Cross Country Meet his junior year where he finished about 20th. During the spring, Don primarily ran the 880. As a junior, he had a best of 2:06 in the District Meet, which qualified him for the State Meet in Columbus. Up there he was placed in the slower of the two crowded heats and finished far back.

Hughes had a good cross-country team during Don's senior year. Their group won the District Meet. Central High School placed second and also qualified for State, as two teams from each District made it to State. Don considers his District cross-country race, in 1948, as probably his best ever high school performance. He typically placed about 10th in the Public High School League meets. On that particular day he sped over the Avon Fields Golf Course well enough to finish third in a District, which included all of the same PHSL competitors as well as runners from other leagues.

Jack Heinemann was the star for Hughes. He was narrowly beaten for the State Meet cross-country title. Don, on the other hand, was disappointed with his State Meet performance, which again left him around 20th. Central totaled 103 points. This earned them the runner-up team spot in the State a few places ahead of Hughes. Don assumed that three or more of the Central runners finished ahead of him. Central had a good squad and they confirmed it by winning the State team title the following year.

Don raced very little during his senior track season at Hughes on account of a severe ankle sprain. It wasn’t until the Districts that he could compete, where he had a very poor performance.  Heinemann was a gifted natural athlete with speed. He often led off the mile relay when he was at Hughes. He received many accolades that season. His mile, just shy of 4:30 put him among the top five in the State Meet. Don’s best high school mile time was a little under 5:00. 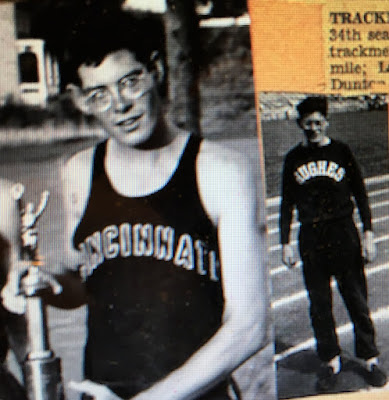 Don became a walk on to the track team at UC because of Bob MacVeigh. MacVeigh, a Purcell grad who was two years ahead of Don, encouraged him to come out for the team. He said they had fun and he knew that Don enjoyed the sport. On that same freshman team (back then athletes could not be on the varsity squads until their sophomore year) at UC was Vern Hawkins. Vern was the mile record holder for Anderson High School. His time was around 4:37 and Don believes that he received some sort of a scholarship.

UC was in the Mid American Conference at that time. They regularly ran against Miami and Bowling Green. The entire team of Miami runners would finish ahead of Don in cross-country races that season. This group included Jack Heinemann, his former Hughes teammate, who received a scholarship to go up to Oxford.

UC’s Coach Nikoloff was very well versed in techniques for the various events. He was also remembered for wearing a particular hat whenever he was coaching. However, information to train properly for distance running was still largely unknown. Don believes that Coach George Rider, up at Miami University, was a bit ahead of the other coaches when it came to training distance runners. UC did not typically field very good cross-country teams back then. 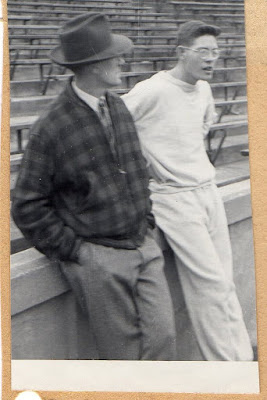 However, the Bearcats did have the makings of a pretty good cross-country squad his sophomore year. Bob MacVeigh, who originally started out as a miler at UC before moving to the 440, and a number of other upperclassmen along with Wahle and Vern Hawkins made for a fine group. 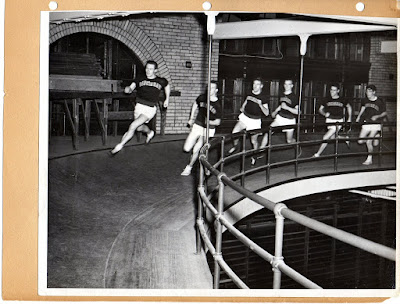 Unfortunately, Vern was drafted by the Army his sophomore year. The City of Cincinnati had plenty of material for the Draft but Brown County, where Vern was from, lacked the numbers of available young men. Student deferments did not apply to this eastern county and Vern was taken away for a couple of years. When he returned to finish up his schooling at UC, because he had a good deal of leg speed, he often ran the 440 or the mile relay.

Bobby Briggs’ 2-mile school record at Cincinnati, when Don was a sophomore, was 9:58. At the time it appeared to be quite secure and unlikely to be lowered. Marv Crosten of Bowling Green, a sophomore like Don, handily finished ahead of Wahle in the All-Ohio Meet.

Cincinnati’s cross-country team, during Don's junior year, was weak. However, this was not true for his old Hughes teammate. Jack Heinemann ran well in cross-country and won the Thanksgiving Day Race by defeating Bob Coldren, an excellent runner representing Ohio State.

During the outdoor track season Crosten prevailed again, but this time instead of easily running away from Wahle he had to outkick him at the end. This was Heinemann’s final track season, as he did not run on the cinders his senior year. Wahle had marks in the 4:40s for the mile and ten teens in the two-mile at the end of his third year.

His season concluded with a disappointing 10:20 two-mile at the All-Ohio Championship Meet. He was discouraged because now he felt that the school record appeared attainable. Before leaving campus for the summer, he approached Coach Nikoloff and said that he would like to run a six-lap 1.5-mile time trial by himself. Don set a goal of running 75 second laps, which would be on pace to finish near the existing school record.

The first lap was eight seconds ahead of schedule. The following five laps took about 75 seconds each. Instead of having him finish at the end of a mile and a half his coach yelled, "Another lap!" Again, 75 seconds. With seven laps completed Coach Nikoloff once more cried out, "Another lap!" This final lap was again covered near 75 seconds. The final time was 9:52.5, over five seconds below the existing school record. 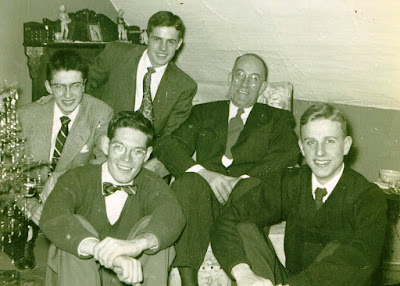 That summer in 1952 sports fans throughout the world witnessed one of the all-time great running performances. Emil Zatopek of Czechoslovakia won the 5000 meters, the 10,000 meters, and the marathon during the Summer Helsinki Olympic Games. Zatopek gained endurance and the ability to withstand pain while competing by employing a seldom used form of training - massive doses of repeat intervals.

Training information was not easily shared or available at that time. Being the only UC harrier that fall he trained by himself and to quote Don, “did whatever”. He was the only UC representative at the MAC cross-country championship meet his senior season where he finished 12th.  Jack Heinemann enjoyed a stellar final campaign by winning the MAC and placing 10th in the NCAA Meet and being named an All-American. 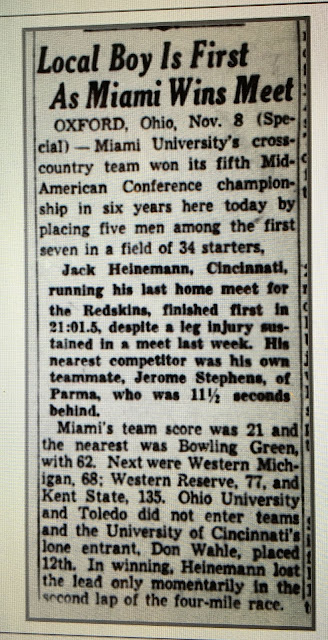 Wahle, always inquisitive and willing to work hard, heard about Zatopek’s method of training and something called fartlek.  He read what he could obtain on the subjects and decided to test them on himself. No one else on the squad was doing this.

Wahle felt that his Zatopek inspired training would serve him well. He knew that no one was training harder than he. Prior to the first track meet he ran a solo time trial in 9:57.  In the first competition of his final year representing UC he set a new two-mile school record at Peden Stadium in Athens, Ohio against Ohio University. The time, 9:52.5, was identical to his earlier time trial from the previous spring. The next week he ran a 4:30 mile. This was followed at the subsequent meet with a new school mile record when he ran 4:27.6. The previous record had existed for 25 years.  Both of Wahle’s records lasted for ten years.  Harold Schuck broke the longer of the two when he covered the 2-mile distance in 9:48.5. 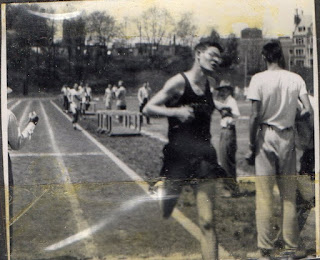 But Don felt that his best performance ever was a mid-May 3/4-mile race set up between three current or past Bearcats (MacVeigh had used up his college eligibility) all of whom were (current or future) school record holders. Don was the miler, Ross Dunton the 880 specialist, and MacVeigh the quarter miler. The assigned 3/4-mile distance was a compromise for each of them. Wahle, knowing that he did not have the leg speed of the other two, employed the strategy of ‘burning them out early so they can’t catch you at the end’. He did just as he ran hard from the start and maintained his lead to finish with a time of 3:12.7.

A dual meet with Bowling Green loomed ahead. His old nemesis, Marv Crosten, whom he had never defeated awaited him in both the mile and two-mile races. In each race, hosted at Bowling Green, Don narrowly prevailed over Crosten by the length of a stride. These races typified Don’s evolution as a runner during his college years. He progressed from being thoroughly outclassed to now being able to defeat one of his main rivals.

The Mid American Conference and All-Ohio Championships ended his college career. In each of these meets he ran and placed well in the mile.

It would be nice to say that a victory concluded his senior season. Next up was the National Amateur Athletic Union (AAU) Championship, which was contested in 1953 at Welcome Stadium in Dayton. Top runners from around the country were in attendance. Unfortunately, Don was outclassed and he started getting lapped in the three-mile contest. Due to being lapped, officials forced him to drop out of the race.

But Don Wahle was not a dropout to the sport. The Greater Cincinnati area was about to benefit from his many contributions to running in the upcoming decades.