When scouts evaluate non-pitching baseball players, the top prospects are considered ‘five tooled’.  This means they hit for a high average, they can regularly put the ball out of the park, they have speed, they possess a cannon for an arm, and they are good fielders.  John Anderson was ‘five tooled’, but in other ways.  He was a good student, he was an outstanding athlete, he had good looks, he was a leader, and he had the personality to charm others.  John’s father was a vice-president at The Procter & Gamble Company. A couple of years ago a niece of his told my wife that when she was a young girl her main memories about John were how handsome and how much fun he was.  She happily recalled his flinging her around.

In 1925 he led Hughes High School to the area’s first Ohio State High School track and field team title. His strength and skill enabled him to win both the discus and shot put events. The victorious discus toss established a new Ohio high school record, nearly 11 feet farther than the previous standard. With these achievements behind him, he departed for Cornell University, where he would receive an Ivy League education and experiences. 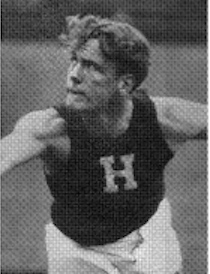 In order to better adjust to the rigors and differences between prep school and college, athletes were not allowed to compete for the varsity teams their freshmen year.  During his final three years at Cornell, he was a two-sport athlete. He protected his quarterback and opened holes for the backs to run through as a tackle on the football team.  Once the fall season concluded, he used his strength and size to advantage by putting the shot and throwing the discus for the track and field squad. 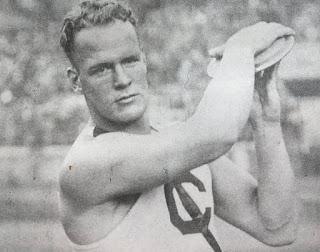 In 1925 his ultimate high school competition waited for him in Columbus, Ohio. Then, as now, that is where the annual state meet championship transpired. 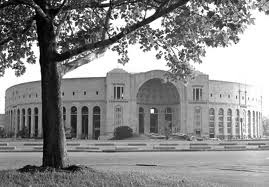 Entrance to Ohio Stadium where the track used to be

In 1928, only three years removed from that high school experience, the youthful John Anderson sought a new pinnacle – the Olympic Games, which were slated to occur across the Atlantic in the Dutch capital of Amsterdam.  But, to go there he first had to qualify at the U.S. Olympic Trials Meet. For the third consecutive (and final) time they were contested at Harvard’s Stadium in Cambridge.


The prime obstacle for Anderson was Bud Houser, who held the world record in the discus. In addition, the veteran had the valuable experience of previously competing at this level when he won the Gold in Paris four years earlier. Houser demonstrated that he was not about to be supplanted easily.  He won the Trials by a meter in front of Weiker, the second place finisher. 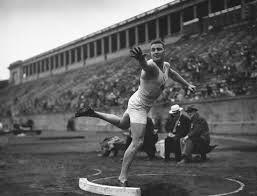 As you will see, Anderson, more than once, was the beneficiary of good fortune when it came to Olympic competitions. This was the final year that four individuals were able to qualify for spots on any country’s team.  That ruling changed to three beginning in 1932. Fortunately the young Anderson secured his position on the discus team by coming in a qualifying fourth in the Trials.  Or, did he?


He unexpectedly placed ahead of Eric Krenz, who earlier had made the shot put team. Krenz, the defending national discus champion, was more of a favorite to make the discus squad, since that was considered his better event. Team selectors considered placing Krenz on the discus team and moving Anderson to the shot put contingent.  Ultimately, that idea was discarded.  John was set to go to Europe to throw the discus.  In the Netherlands, Houser defended his title and once again earned the gold medal. Anderson always seemed to handle pressure well. He placed fifth at the Games and he was the third American, a notch up from where he finished in the Trials. 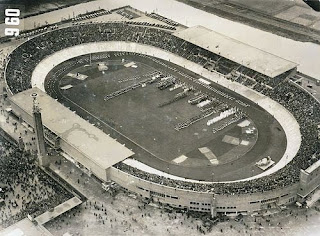 Anderson returned to Ithaca for a busy final year at Cornell.  He was president of the Student Council, played football, and captained the track and field team.  Being an above-average performer with the shot (49 feet) he won the 1929 IC4A indoor shot put title.  Once he moved outdoors during the spring, Anderson threw the discus 150 feet 3 Inches for a new Penn Relays meet record. Those were the only points that Cornell scored in the meet. In his last competition for the Big Red trackmen, a Cornell-Prlnceton dual meet, he set a new personal record with a throw of 151 feet, 8 inches. When he graduated in 1929, he was a member of the Quill and Dagger Society and won his Phi Beta Kappa key. 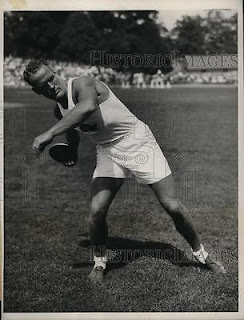 Eric Krenz repeated as the discus national champion in 1929. In the 30s a new threat to discus supremacy appeared.  The huge Paul Jessup, of Washington, won the national championship in both 1930 and 1931.  In 1930, Jessup established a world record of 169’ 8 7/8.”  This was 18 feet over John’s best.
In 1932 the Olympics were to return to the American soil in Los Angeles.  The Trials were set for Stanford, California on July 15 and 16.  Anderson, who was receiving assistance from the New York Athletic Club, was having a good year.

He made his second Olympic team by placing ahead of Jessup, the world record holder by seven feet.  Henri LaBorde filled out the discus squad. 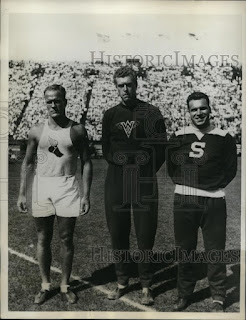 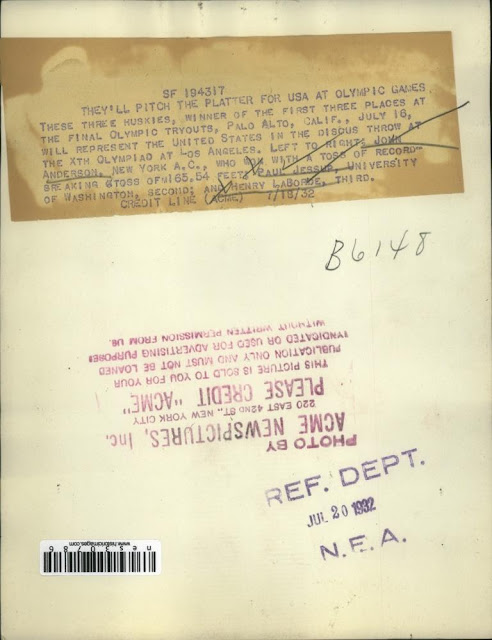 The 1932 Los Angeles Summer Games began the following month.  1,408 athletes, 37 countries, and 117 events participated.  Since it was in the midst of the Great Depression, the City of Los Angeles was only able to attract half as many athletes as the 1928 Amsterdam Games. Those who came, however, stayed in style. The 1,206 men at the Games were housed in the Olympic Village Los Angeles - the first Olympics to have a single village.

The women numbered 126, and they lodged in a luxury hotel, unlike the village accommodations for most athletes at Rio. The 1932 Games were completed in 16 days and since then, all of the Games have remained between 15 and 18 days. The Coliseum Olympic Stadium stupefied the whole world by its proportions and the quality of its equipment. 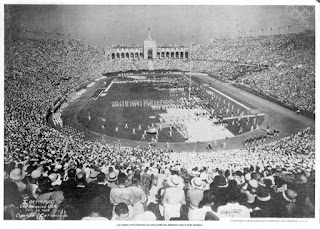 During the discus competition on August 3, 1932, Anderson assumed the lead in round two.  He improved upon that mark in rounds three and four and they stood up for the victory. Another American, La Borde, was the runner-up. Jessup was down in the standings. 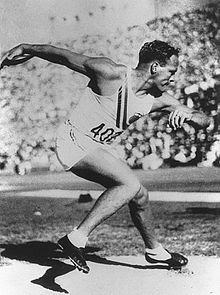 John Anderson in the discus ring at the 1932 Olympics 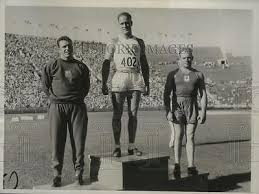 Anderson on top of the winner's podium

However, luck once again had sided with Anderson.  Do you remember how he qualified for the 1928 team because then the rules allowed four athletes per event from the same country?  That was the final Olympiad to permit this.  His good fortune blossomed again.

Some people say that the worst piece of officiating ever in the Olympic Games occurred during the 1932 discus competition. The French had a good thrower by the name of Jules Noel. Prohibition laws were still in effect in the United States but the French team bypassed the U.S. restrictions by claiming that wine was an essential part of their diet. Apparently Noel’s hydration plan included, during the competition, several trips into the Los Angeles Coliseum tunnel to take swigs of champagne. 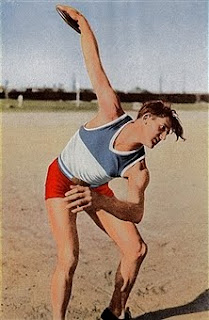 
During the fourth round of the men's discus, Noel got off a big throw, which appeared to be beyond the flag marking the 162’ 4½” leading heave of John Anderson. However, the Frenchman’s throw occurred at a crucial moment of the pole vault and all the officials were watching that rather than doing their job determining where his effort landed. They failed to see Noel's long toss. As compensation, Jules Noel was awarded another throw, but he was unable to repeat that long effort. Noel placed fourth and Anderson secured the gold medal. He had the four longest throws of the competition, not counting Noel's invisible toss, all beyond the previous Olympic record.

Rather than heading back East, Anderson stayed put in Southern California as Hollywood came calling. Anderson was thought by the movie moguls to have "dazzling masculine beauty." He was considered as the star in the film “Search for Beauty,” but the lead role ended up going to Buster Crabbe, who was also a 1932 Olympian.  Crabbe won the 400-meter freestyle in swimming.  Crabbe ended up having a long movie and television career.  The top three syndicated comic book heroes of the 1930s were Tarzan, Flash Gordon, and Buck Rogers.  Crabbe was the only actor to play all three.  Even though he did not get the starring role, Anderson did have a part because the producers thought he was a ‘hunk’ due to his superb build.  He stood 6’ 3½” and weighed 225. 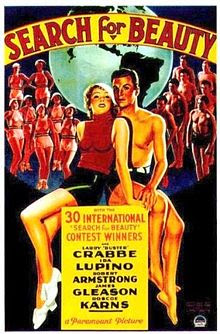 If you wish to see Anderson in a short clip from the film Search for Beauty extolling the benefits of exercise, open up this YouTube link.
https://youtu.be/yVQ284nsUv0

‘Search for Beauty’ is a 1934 pre-Code dramedy (comedy-drama).  Here is how the Pre-code Hollywood period was described:

This period represents the most decadent era in motion picture history. In 1934, Hollywood was turned upside down by the enforcement of a strict “Production Code” that would change the way movies were made for the next 34 years. During the “pre-code” period (1929 to mid-1934), censorship barely existed in Hollywood and filmmakers had free reign to make the movies they wanted and the public demanded. No subject was taboo including adultery, murder, immorality and sex. Screen legends Cary Grant, Fredric March, Claudette Colbert, Tallulah Bankhead, Randolph Scott and Sylvia Sidney all starred during this, one of the most influential periods in cinema history.

In 1934, censorship arrived in Hollywood in the form of the "Production Code," - The "Code" was an attempt (which worked) to avoid government guidelines. Prior to that time, censorship was carried out at the local level and the rules varied all over the map- literally. This was a nightmare for the distribution companies, who had to cut (and then restore) prints for virtually every jurisdiction.  The Production Code was designed to circumvent these local censorship boards by self-censoring and pre-censoring by the industry itself. There was a real fear in the movie industry that the federal government would pass their own guidelines in order to obviate the local boards. The code was set up to head this off.

John did not remain very long in the movie industry.  Not ready to retire from athletics, he again won the AAU discus title in 1933. Along with two national crowns, he scored in three others. In June 1936 he unleashed the best throw of his career (165’ 9”) while winning the Eastern Olympic Trials. Unfortunately, at the Final Trials, he failed to make a third consecutive Olympic team.  Because of experiences that he gained in the Pacific during WWII as a lieutenant commander in the naval reserve, he obtained a post as the chief navigator of a salmon fishing fleet. In 1948, while on an expedition some 700 miles north of Anchorage in Nankek, Alaska he suffered a brain hemorrhage and died immediately, one week after celebrating a 41st birthday.  John's niece said that one of his brothers traveled to Alaska to retrieve his body.