Sam in his Hughes uniform

A 1933 graduate of Hughes High School and a 1937 graduate of the University of Michigan, Sam Stoller led a fascinating life of champion and runner-up, of Olympian and non-Olympian, of athlete and singer.  Sam was born in Cincinnati and attended Hughes High School at the same time that Jesse Owens was running in Cleveland.  As a result, Sam never won the state meet in high school, finishing second to the great Jesse Owens who ran for Cleveland East Tech.  The two followed each other to the Big Ten where Stoller continued to be a frequent runner-up to Owens.  Sam ran for the University of Michigan while Jesse competed for Ohio State.  During their college days they faced each other 20 times with Sam winning only once, yet the races were always close.  Sam once said, “I’m the fellow you see in the movies of Jesse’s footraces.” 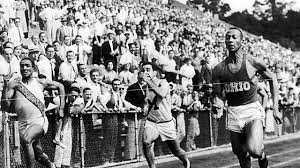 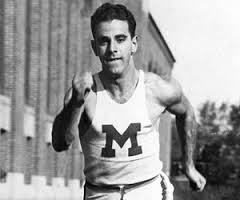 Yet, it was in the 1936 Olympic Trials followed by the Berlin Olympic Games where the two earned lasting recognition.  Stoller, after John Anderson (1928 and 1932), became the second Hughes graduate to qualify for an Olympic track and field team. Jesse immortalized himself by winning four gold medals in the historic “Hitler Olympics” whereas Sam became best known for qualifying for the USA 400-meter relay, then being denied the opportunity to run.  Considerable controversy surrounded that decision at the time and even to the present.

At the 1936 Olympic Trials at Randall’s Island in New York City, the final places for the 100-meters were as follows:  1. Jesse Owens,  2. Ralph Metcalf,  3. Frank Wykoff,  4. Foy Draper,  5. Marty Glickman,  6. Sam Stoller and 7. Mack Robinson (brother of Jackie Robinson).  Using the logic and current thinking of United States sprinting, the top four would run the finals of the 400-meter relay while fifth and sixth would serve as backups, running only in the preliminary trials.  However, at that time, 1936, the plan was to have the headliners run the open sprints and to have the others concentrate on their handoffs, directing their entire attention to the relay.  This is the way it was done in 1932. In 1936 the two open 100 runners, Ralph Metcalfe and Jesse Owens, were aware that they would not be called to run in the relay.  Consequently Stoller rode the Olympic ship to Germany fully planning to run the 400-meter relay. 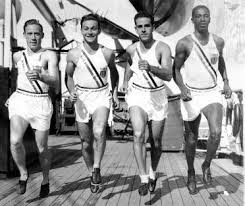 Once in Germany the team of Sam Stoller, Marty Glickman, Foy Draper and Frank Wykoff practiced their handoffs faithfully in anticipation of the day when they would represent the USA.  There might be a question as to why Wykoff, rather than Robinson, was designated for the relay. Wykoff had qualified as an open 100 runner and Robinson had done the same in the 200. The 200 was considered more strenuous than the 100. In addition, Wykoff had Olympic relay experience.  He was on the winning world record teams of the 1928 and 1932 Olympiads. Almost from the beginning, Frank Wykoff was considered the anchor man for the team.

While in Berlin, the U.S. coaches supposedly heard a rumor that the Germans were hiding their best sprinters so they could surprise the world, especially the Americans in the 400-meter relay. However, in the 100 and 200-meter races they were nowhere to be seen. This is regarded as a lame excuse at best.  Near the end of the Olympic Games, and the morning of the 400-meter relay trials, a hurried meeting took place with U.S. head coach Lawson Robertson, assistant coach Dean Cromwell and the seven American sprinters.  This meeting is portrayed in the movie “Race”, which is about Jesse Owens. In that meeting it was announced that Owens and Ralph Metcalfe, who had placed first and second in the 100 meters, would replace Stoller and Marty Glickman.  The logic explained during that meeting was that the coaches wanted to put the four fastest runners on the relay. 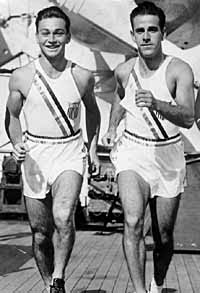 This is how it is done in 2016, but it was not the custom at the time.  Neither Owens nor Metcalfe had practiced baton exchanges with the others while in Germany.  The ability to rapidly and safely pass the baton is an important component of the event.  Even though the raw speed of the original team was slightly inferior to the one with Jesse and Ralph, Frank Wykoff felt that their exchange practices would allow the original foursome to move the baton around the oval as fast or even quicker than with the substitutes.

Favoritism is another possibility as to why the switch was made. In a recent 100-meter runoff just prior to the trial heats, Stoller and Glickman finished ahead of Draper. This indicated that the two who were removed were faster than one who did compete, which counters the argument that the coaches were only interested in the fastest quartet. Coincidently, both Draper and Wykoff ran for Cromwell at the University of Southern California.

The theory most believed, and the interpretation by the two runners left off the relay, is that they were dropped for religious purposes since they were both Jewish and the US Olympic Committee did not want to offend Hitler and the Nazi leaders.  Both Avery Brundage, the Head of the USOC, and assistant coach, Dean Cromwell, were members of the American First Committee, an isolationist group with anti-Semitic leanings. Charles Lindbergh headed the organization. Many feel that the directions to change the team flowed down from Brundage. He presented a favorable Nazis point of view on several occasions.  Glickman, who was more vocal than Stoller about the rationale for the decision, offers his opinion in a short video:  https://youtu.be/F87h1vzv_vY

It was Stoller’s 21st birthday and he could not will himself to go to the magnificent stadium that Hitler constructed to witness the relay race that he believed he should have been a part of. Sam vowed never to run again. 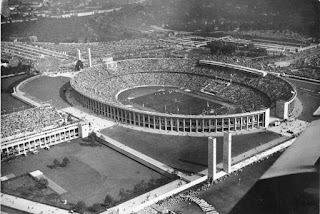 However, he reconsidered and ran during his final year at Michigan. Since Owens did not return for his senior year at Ohio State, Stoller dominated the dashes during that season.  He won both the Big Ten and NCAA 100-yard dash titles. This required a change from the headlines of articles that previously read, ‘Second, Stoller.’ 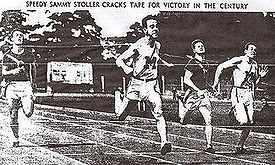 Stoller winning another race in 1937

After the NCAAs in 1937, he stayed in California, taking up a singing career in nine separate movies as Singin’ Sammy Stoller.  Later in life he was an announcer for the Washington Senators.  In 1988 the US Olympic Committee tried to atone for the Olympic slight by awarding Stoller and Glickman the General MacArthur Medal.  Sam Stoller was also inducted into the International Jewish Sports Hall of Fame before dying in 1985 at the age of 69.

The team of Jesse Owens, Ralph Metcalf, Foy Draper and Frank Wykoff   went on to win the gold medal in the world record time of 39.8.  However, the controversy continues today. 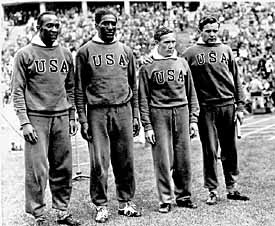