D’Andre (DeeDee) Hill is arguably the fastest woman ever born in Cincinnati.  She is the sixth and final local athlete to make a 20th century USA Olympic Track and Field team.  D’Andre ran at Mt. Healthy High School with great success under coach Ken Berry.  She twice won the 100-meter Ohio State Championship and the 200 once.  Her 1990 mark of 11.77 led all high school juniors nationally.  Her 200-meter time of 24.25 was fourth among high school juniors and it ranked 10th nationally among all classes. Unfortunately, an injury during her senior season prevented her from adding to that total.

After graduating from high school, her talents headed south to Baton Rouge where she became a member of the powerhouse sprint team of Louisiana State University. Her studies concentrated on kinesiology.  Starting in 1987, their women’s squad won eleven consecutive outdoor NCAA track and field championships.  DeeDee was to become an important contributor to that streak.

She did not compete during her freshman year.  However, as a sophomore she was a valuable component to a team loaded with seasoned stars. She earned five All-American honors that year. Three were gained at the outdoor NCAA Championships (400-meter relay, 100 and 200) and two came indoors (55 and 200).  Once the collegiate season ended, she tested herself against older athletes in the outdoor National Track and Field Championships. D’Andre made the 100-meter dash finals and placed 7th overall.  However, it was during her junior year with the Lady Tigers that her abilities prominently came to the fore.

Now she was the headliner.  She was the relay team anchor, not the recipient of the first handoff.  Her responsibility was to bring home a victory, which she did quite often that season. At the Penn Relays both the 400 and 800-meter relay foursomes, anchored by D’Andre, led the way before huge crowds. To cap the season, the 4x100 unit won both the Southeastern Conference and NCAA Championships that year.  Individual 100 crowns came at the SEC and NCAA championships. She was named the SEC’s Outstanding Female Track Athlete for the outdoor season and once again was on five All-American listings.

She had proven her capabilities against other collegiate sprinters.  How would she fare against the pro athletes?  In 1995 the World Track and Field Championships were to be hosted by Sweden in Gothenburg.  DeeDee went to the USA National Championships to see if she could make the team. Welcome to the major leagues.  Gail Devers (reigning Olympic 100 gold medalist), Gwen Torrence (4th at the 1992 Games), Carlette Guidry, Celena Mondie-Milner, Chryste Gaines and others were there to prevent her from booking passage on the European trip.

D’Andre finished fourth, which earned her a spot on the 400-meter relay squad.  In Gothenburg she anchored the team during the semi-final heat that they won.  Once having qualified for the finals, the coach replaced her with the veteran Torrence where the team again placed first.  Because she was a member of a heat foursome, DeeDee also received a gold medal.

1995 was to be only a prelude to 1996.  The Olympic Games were returning to the United States in Atlanta.  The quadrennial Games are the highlight of any track athlete’s career.  While competing for her school, she once again earned five All-American honors and claimed the short sprint titles that were indoors and outdoors.  She received the 1996 Honda Award, which is given annually to the NCAA Women’s Track and Field Athlete of the Year.

At the outdoor NCAA Championship Meet she won with a personal best time of 11.03.  For female sprinters, 11.00 is a magic mark much like 4:00 is to milers.  To dip below that time is to enter rarified territory. Two weeks after the collegiate championships concluded, the Olympic Trials were to begin in mid-June in Atlanta.

The recently constructed Centennial Stadium was undergoing a test run during the Trials.  You can visit Stockholm (1912), Berlin (1936), and Helsinki (1952) and see the Olympic stadiums, which are still operational.  Atlanta was different.  That arena was only used three times for track and field – the Olympic Trials, the Olympic Games, and the Para-Olympic Games. Afterwards, it was reconfigured for baseball and renamed Turner Field.

Atlanta in June can be sweltering hot and in 1996 the thermometer was ready to explode.  Since the stands were not filled, spectators moved under the upper deck overhangs to seek shade.  While it may have been uncomfortable for those of us viewing the on field action, four years of living in Baton Rouge, Louisiana must have been the perfect preparation for D’Andre. 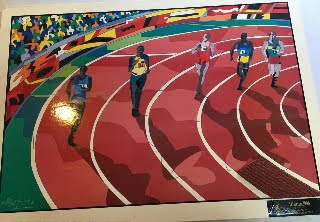 Lower right - A piece of the Atlanta track

Distance runners probably feel that sprinters have it easy.  Go hard for a few scant seconds and you are finished. They are wrong.  A body going at full speed withstands an intense pounding.  In the Olympic Trials one must do this four times if they are to qualify for the USA Team.  DeeDee, entering the competition, had a best time of 11.03.  All the big named athletes from the year before were returning.  Then she was fourth.  Could she nudge up that placing?

34 of America’s finest female sprinters had qualified for the Trials with the same objective. The first round heats began on June 14. D’Andre was in the first of four sections. The top four from each race, plus the next eight with the fastest times, were to advance to the quarterfinal round, which was to be held later that same day.  DeeDee placed third behind Gail Devers and Chryste Gaines, but her time was 11.00 flat.  This was an all-time best for her and encouragingly it was run into a slight headwind. The next step was to come later that day when three more quarterfinal rounds were to be contested.  The top five from each race plus the next one fastest person were to advance to the third round.

Gwen Torrence won her second race of the day in the first quarterfinal event.  D’Andre was in the second section.  When the gun sounded, the air was still.  DeeDee won over Inger Miller, Carlette Guidry, and her former LSU teammate, Zundra Feagin.  And, her time was 10.99.  Finally, a sub 11.00 century was achieved.  Gail Devers prevailed in the third quarterfinal race. 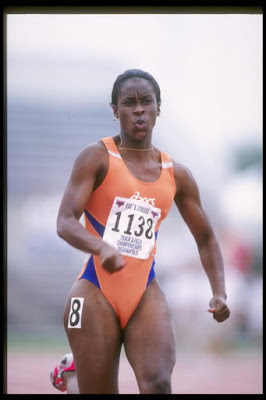 D'Andre at the Olympic Trials

The semifinals were scheduled for the next day.  Only two races remained for anyone making the team.  The top four from each semifinal section would advance to the finals, which were set for later that same day.  Mere fractions of a second would separate those who would advance to the finals and those who would disconsolately watch from the stands.  Because of the punishment to the tendons, muscles, and ligaments, accomplished and veteran sprinters tend to ease up near the end of an early round race in order to mitigate damage to the body.  This had not been DeeDee’s luxury.  She was going to do whatever was needed to continue advancing. It required setting personal records in each of the first two rounds.  She was coming off of a long collegiate season.  Would her body hold up to the strain?

Hill was in the first of the two semifinal races.  Nearby, also settling into her starting blocks, was the defending Olympic champion, Gail Devers.  As they uncoiled out of the blocks, there was a very slight aiding tailwind, well within the allowable parameter of 2.0 meters per second.  For an unbelievable third instance D’Andre set another personal record performance.  Now it was lowered to 10.97 as she won and barely nipped Gail Devers.  Gwen Torrence prevailed in the second semifinal bout as she handily won her third consecutive race.  In a couple of hours DeeDee would know whether or not she could call herself an Olympian.

The final eight had speed to spare.  Many had reputations, which warranted them shoe contracts.  DeeDee was the only collegiate in the field.  Obviously she knew that she was running well.  However, she did not know if it was fuel or fumes that remained in the tank after her hard three efforts.  They were called to the line. Moments after the starter’s pistol broke the silence in the stadium the electronic scoreboard showed that five of the eight sprinters had shattered 11 seconds.  Gwen Torrence won her fourth race in two days.  Her time was 10.82.  Gail Devers was runner-up, and only one-hundredth of a second behind her, in the third and final qualifying position, was the young lady from Cincinnati.  Her time of 10.92 was once again another PR.  She now was a member of one of the toughest teams to qualify for, both as a 100-meter dash sprinter and presumably also as a 400-meter relay runner.

As the Games began, D’Andre successfully made it through the first two rounds.  Now she lined up for her semifinal section.  The first four qualified for the finals and unfortunately DeeDee’s position was sixth.  In none of her three Olympic races did she break 11.00.  Some have speculated that perhaps the long season (as a collegiate she was racing in January and the pros, who were fresher, only began racing in late Spring or early Summer) contributed to her demise.  Whatever the reason, Hill was on the sidelines watching Dever’s defend her gold medal and seeing Torrence get the bronze.  Now it was time to regroup and prepare for the 400-meter relay. 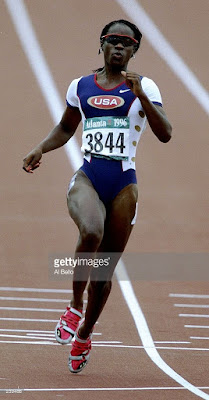 D'Andre at the Olympic Games

Countries need to submit to meet officials the names of the pool of runners that they will use to draw from for their relay teams.  The USA historically has used the first three 100 finishers from the Trials plus another sprinter or hurdler. The additional names, beyond those four, are necessary in the event someone becomes injured, ill or runs in the qualifying round to give someone a rest.  Atypically, D’Andre was omitted from the relay squad, even though she placed third at the Trials.  Politics comes to mind as a possible explanation.  The USA female 400-meter relay team was almost guaranteed a gold medal as long as they got the baton around the track without dropping it.  Money and fame is associated with being a gold medalist.  The other sprinters, including those individuals that DeeDee defeated at the Trials, were pros and had agents looking out for their self-interests.  Hill was the only college runner in the pool.

The official explanation by the coach was that they felt that D’Andre was a more accomplished straightaway sprinter and Devers and Torrence had already laid claim to the 2nd and 4th legs of the team which are primarily run on the back and home stretches of the track.  The selected leadoff and 3rd leg runners, which are contested on the bends, were considered by the coaches to be better curve runners than DeeDee.  The coach may also have felt that DeeDee’s peak was past and her performances were beginning to plummet.  Whatever the true reason, it was difficult for her to watch athletes that she had defeated at the Trials receive the golden opportunity that she was denied for a medal at the Games.

She ran professionally from 1997-2001 without ever ranking among the nation’s top ten.  Dayton University, Texas Christian University, and Vanderbilt University have been universities where she has coached since retiring from sprinting. 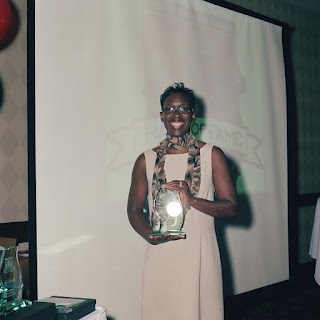 D'Andre at the 2011 Local Hall of Fame Induction