While the vast majority of our blogs limit themselves to actions committed during the 20th century, knowledge of what happened in the 1800s provides the backdrop to understand our local running and walking origins.  For that reason, 19th century information is provided.  This particular blog covers news through 1909.
Bob Roncker

As America was becoming more urbanized, many felt the need for different forms of physical activity because of the lifestyle changes that were going on. Greater Cincinnati had a large number of German immigrants in Turner societies. The Turners had a strong sporting tradition. During this period, the Cincinnati Athletic Club (The Gym) was the dominant sport center in Cincinnati.  Other gymnasiums, a few high schools, and colleges were beginning to have athletic programs.  Track and field teams and a walking club were among the Gym’s many activities.

Much of the information about club and AAU activity was gained from a publication called “The History of The Cincinnati Athletic Club 1853-1976” by Jonathan Dembo.

The Gym developed an East End athletic ground on the Pendleton family estate, which included a cinder track.  It lay between Ridgely and Watson Streets and between Eastern Avenue and the Ohio River, just west of the East End Gas Works.  It opened on July 4, 1891. Around this time the Gym’s sporting philosophy had moved to “athletics for excellence” from “athletics for health.”  They were promoting competitive excellence over the general health of the club members. Active inter-club competitions in local, regional, and national amateur organizations took place up until America’s entry into World War I. 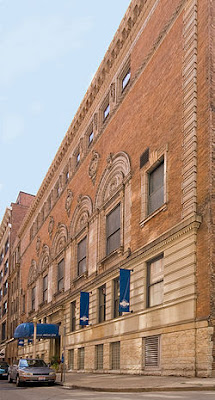 1888
Woodward High School had a field day on May 19. This is among the earliest track and field high school meets in the state of Ohio.  The marks that are listed below represent the best ever, or state records, achieved in the state up to that time.  A progression of state high school bests, which were set by local athletes, will be listed as the years follow.  Each of these individuals attended Woodward.
100-Yard Dash – W. Venable; 11.8
880-Yard Run – Cam McDiarmid; 2:43.0
High Jump – G. Beaman; 5’0”

1892
UC
The first official track team sanctioned by the University is started. The only sport on the Clifton campus older than track is football.

1897
UC
The University of Cincinnati united with other colleges from Ohio to form a committee making the State Intercollegiate meet possible. UC was represented at this meet.

1900s
As a new century began, local running in walking events were limited. However, one was able to see an annual March midwinter athletic carnival hosted by the Central YMCA.  This event was held in the Ohio National Guard Armory at 1443 Freeman Avenue. The armory was built in 1889 and also served as a center for a variety of sporting activities. Its usefulness as a venue for sports ended by 1960 and by the late 1980s it was demolished. The Armory, a few doors north of Ezzard Charles Drive near the entrance to the Museum Center, was up the street from the present day Job Corps Center building. 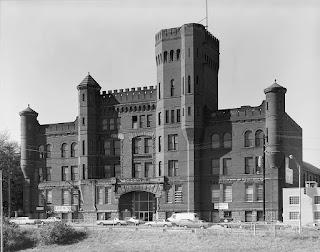 At this time the Gym was clearly dominant in many sports, including track and field.  It had the best athletes, the best coaches, and the best facilities.

Indoor Track and Field
The Central YMCA hosted its first annual March midwinter athletic carnival in the Ohio National Guard Armory. This event was to continue into the 1930s.

1901
UC
War debts, which closed the fields, displaced the track team and made it impossible to hold intercollegiate meets. An inter-class field day was held instead.

1906
Indoor athletics appears to have been quite popular at this time. Athletic clubs throughout the region increasingly sent teams for inter-city indoor track meets during the winter months. A team from New York requested help in defraying the cost of the trip to Cincinnati to participate in the January 27 indoor meet at the Armory.  Apparently this was fairly commonplace, especially if there athletes that would increase the attendance. The request was granted.

The Gym’s team, led by Robert E. Heekin, came within one point of beating out the University of Indiana in an indoor track meet.

UC
The first mention of an actual coach (other years only mentioned the captains and managers) was John A. Davis.

Club
Early each June each year, the Gym continued to hold its “Athletic Carnival” on the grounds that they owned. The carnival drew many contestants from all over the state. For example, the Columbus Sporting Goods Company sent a team of hammer throwers and shot putters and received permission to include six Ohio State University students as members of its team.

Club
The terrible floods of 1907 destroyed the Gym’s athletic grounds and temporarily ended the Gym’s rise as an athletic power in outdoor events.

Ultra-Performers
During the 20th century we see people with local connections capable of and willing to pursue challenges of extreme distances. Dan O’Leary certainly falls into that category. O’Leary, an Irishman, was a top international walker of that era. 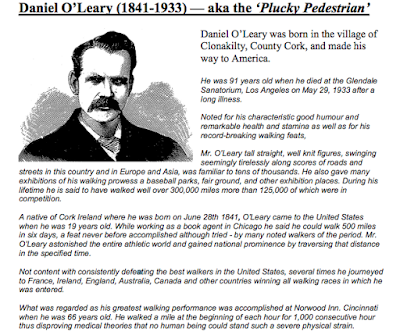 He felt that his greatest accomplishment occurred at the track adjacent to the Norwood Inn in Cincinnati where he walked 1000 miles. He was 66 years old at the time. He would walk a mile at the beginning of each hour, about 15 minutes, and then rest for 45 minutes to recover before starting off again. At first this wasn’t difficult, but the continuous nights of broken sleep eventually took their toll. One account notes that, “In the middle of the night, O’Leary might sleep for 40 minutes but then be aroused by the Norwood Inn staff and volunteers, trudge outside to the track and walk a mile while judges and timekeepers monitored him, and then he would retire to his room, only to be woken up at the start of the next hour.

When O’Leary began his walk on September 8, 1907, he weighed 144 pounds.  When he finished on October 20, he was down to 122 pounds.  By the last week, O’Leary was periodically suffering from some form of dementia when woken up in the middle of the night. He thought he was a younger man back in the mid-1800s.  Then on Tuesday at 3:00 a.m., as the Ogden Standard in Ogden, Utah, described it, O’Leary was suddenly attacked by spasmodic derangement of the intestines, which threatened to prostate him and from which he was relieved by the administering of restoratives.  It was the most polite way possible of observing that O’Leary had diarrhea.

On his last day of walking, sores formed on his left foot.  For his troubles, O’Leary received $5, 000 from the International Tuberculosis Association, which asked him to conduct the stunt to raise awareness of their organization.”  He was an unusual person and he possessed strong opinions about taking care of himself.

1908
UC
Two dual meets were scheduled that spring, although one was cancelled due to bad weather. Miami was victorious in the other meet.

First Ohio Boys Track and Field State Championship Meet
This meet, the oldest of the Ohio high school state tournaments, was first run at Denison University in 1908 with just 12 schools participating.  It moved to Ohio Wesleyan University the next year.   The meet then relocated to the campus of Ohio State University in 1910.  Except for the years 1999-2003, when the meet was held at Dayton Welcome Stadium, the state boys track meet has taken place on the OSU campus ever since.

It wasn’t until 1921 that an athlete from the Cincinnati area scored in this meet.  Rabenstein from Lockland H.S. came in 4th in the 220-yard dash in the Class B (smaller schools) division.

In 1923 two athletes from Hughes H.S. became the first Cincinnati large school entrants to score.  Bolton came in 3rd in the shot put and 5th in the javelin.  Sophomore discus thrower John Anderson, who in nine years would win the gold medal in the 1932 Olympics, placed 4th. 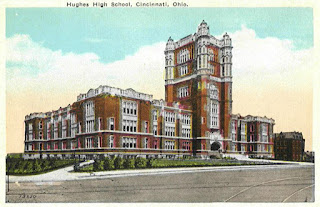 The Thanksgiving Day Race Begins
The first known local road race took place on Thanksgiving Day on November 26, 1908. Eighteen individuals finished the 7-mile distance and three dropped out. Lovell Draper’s time of 37:15 won the first edition. He was victorious the subsequent four years.  Draper held the record for the most number of wins by any one male until decades later John Sence came in front six times.  Julie Isphording has the record for most victories with eight.

Walking
The Cincinnati Gym Walking Club is founded in 1908.

Club
By 1908, the Gym had become something of a national model for younger, smaller gyms, which frequently requested that the Gym (GCAC) send teams to help promote their meets.  Also, GCAC meets set standards for organization and structure, which other clubs sought to emulate.  Samples of their model were often requested by other organizations.

Myron Johnson, W.E. Schlemmer, and Charles Tobias were remembered as good long distance runners of that period. Al Sandau’s name was written all over the trophy case.

Club
The Gym continued to arrange dual, open, and regional meets each year participating in six to twelve competitions.  Other teams were the Marion Club of Indianapolis, the First Regiment Athletic Association of Louisville, and the Wabash Athletic Club of Wabash, Indiana.

There was a June meet hosted by the Gym in Carthage against the Miami University Athletic Association.

The Gym competed in meets arranged by other organizations and sent teams, as it seemed appropriate.  In August 1909, The Dayton Turngemeinde sent the Gym an entry blank for its second annual field day, scheduled for September 25.  John Roehm, secretary of the athletic committee that was organizing the event, reminded the Gym that 20,000 spectators had attended the first field day and said they were expecting even more in 1909.

The Gym’s track team was very strong during this period of time.  In September, Alfred Brodbeck resigned as Physical Director of the Gym to become a “physical instructor” at the University of Cincinnati.  His departure led to an exodus of athletes from the blue and white into retirement or to other local clubs like the YMCA.  The Gym appointed Ray Raymond as Physical Director and it was his main task to rebuild the track team, which he did quite well.

Lovell Draper was probably the greatest runner under the tutelage of Redmond.  He primarily ran middle distances and relays for the Gym’s teams.  He was also a multi-winner of the annual Thanksgiving Day Race.  It is understood that his fame was such that the press followed his ‘every move.’  Articles appeared on his training methods, his diet, and his philosophy of life.  An injury, which caused Draper to withdraw from an upcoming meet, made headlines. 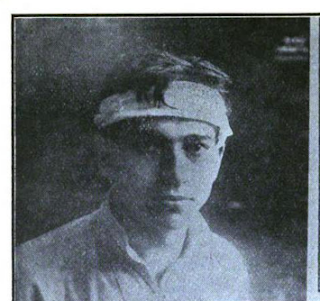 In November 1909, G.F. Thompson, physical director of the YMCA wrote to Maurice Longenecker, Superintendent of the Gym, asking him to serve as a judge at the finish of the YMCA‘s annual Thanksgiving Day road race from Ft. Thomas to the YMCA building.