V.1 #48 Bob MacVeigh – How His Love for the Sport Became an Agent for Change

Bob, perhaps more than any other local individual, represents the bridge between the way the local running community existed around 1950 and what it evolved to during the latter half of the 20th century. He was willing to try and do things that were uncommon at the time.  As a result, others followed his lead.

MacVeigh began high school at Chaminade in Dayton and promptly failed to make the football team due to his being rather small and skinny. Then, during his sophomore year, his family moved to Cincinnati, where he began attending Purcell High School. The Cavalier pigskin squad was a powerhouse during those years; so to satisfy his sporting desires he decided instead to try managing the school’s athletic teams.

During the fall, he assisted the football team. The next season saw him with the basketball squad. Then, when spring came, he asked Coach Brother William Schroeder if he could help manage the track team. However, Brother Bill suggested that he run instead. Bob’s slight frame, which was shoved around on the gridiron, was better suited for hurrying rather than crashing.  He immediately found himself finishing ahead of the school’s other distance runners. His niche on Hackberry Street was established as he found his sport. Bob became a decent high school miler and he graduated from Purcell in 1947.

Back then most runners, estimated at 99.9%, when they left high school, gave up the sport because the opportunities to continue running were scarce. Bob however, enrolled at the University of Cincinnati in the College of Engineering (later he transferred to the College of Business) and proceeded that first year to join the freshman cross-country and track and field teams, which were guided by long time coach, Oliver Nikoloff. 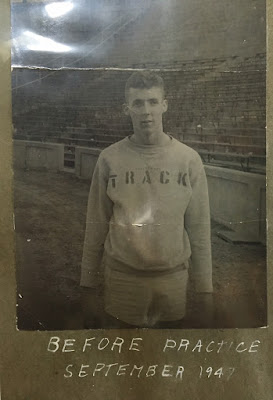 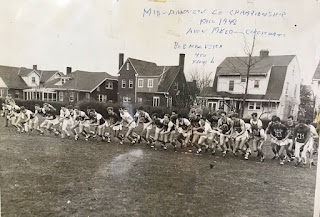 Start of Mid-American Conference meet in Cincinnati during his sophomore year at Avon Golf Course on Reading Road near Paddock Road. MacVeigh is the fourth runner from the left.

Perhaps one of his biggest achievements, certainly an unusual accomplishment, at UC occurred prior to the start of his second year of outdoor track for the Bearcats. Don Berg, who ran at St. X and was a far superior 440 runner than Bob in high school, and MacVeigh established a two-man team representing the campus Newman Center as they took on the larger fraternities in the annual indoor intramural track and field championships.  The competition took place at the old gymnasium just south of Nippert Stadium. At the time there was an indoor track hanging above the basketball floor. It was 18 and 3/4 laps to a mile. 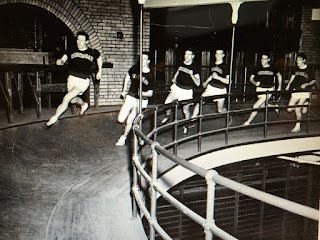 This event was a big deal to the Greeks because points gained here counted towards the coveted All-University Trophy. Bob took care of the longer events as he won the 440, 880, and mile while Don sprinted to second places in the 100, 220, and 440.  Between the two of them, much to the chagrin of the fraternity brothers, they, as a team, came out on top.

During his first two track seasons in college, the coach had him competing as a middle-distance runner, mile and 880, similar to what he did at Purcell. At times he was also a member of the mile relay. Bob won a mile race against Kentucky, but his times were progressively getting slower and he was becoming discouraged.

MacVeigh wanted to contest the open 440, but coach Nikoloff ruled against that.  However, once the school season ended, Bob took the opportunity to run the 440 at the June 2 Metropolitan Cincinnati AAU meet at Withrow Stadium. His time of 50.1 eclipsed the local AAU meet record formerly held by Ted Corbitt. 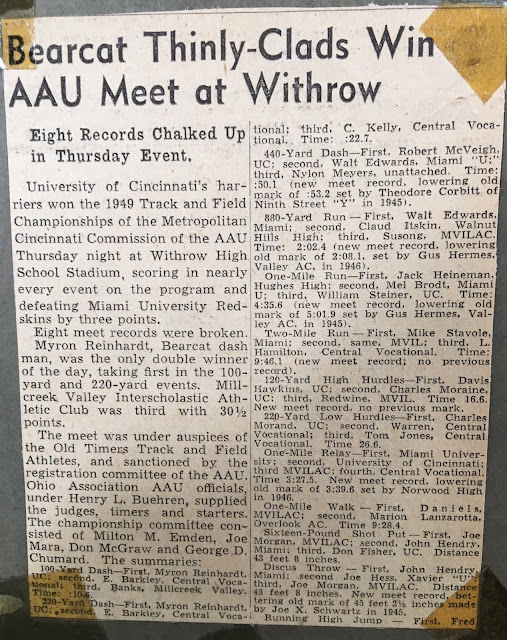 Two days later the Ohio AAU meet was to take place at Welcome Stadium in Dayton. Top competition always appeared here.  On a sloppy slow surface, Bob placed second in the 440 behind Mal Whitfield, the previous year’s Olympic 800 gold medalist. With those performances Coach Nikoloff agreed that perhaps Bob was a sprinter. As a result, contrary to the norm, Bob made the unusual transition of gravitating from longer to shorter distances while in college rather than moving in the opposite direction.

Now, as a 440-yard specialist, he met with a great deal of success during his final two years of college eligibility. He led the team in points scored and did well in the championship All-Ohio and Mid-American Conference meets. 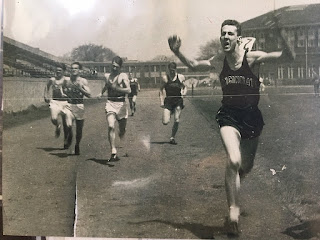 Miami’s team was very strong during this period of time. Bob, and their ace 440 runner, Roger Moore, had a number of thrilling races against one another. 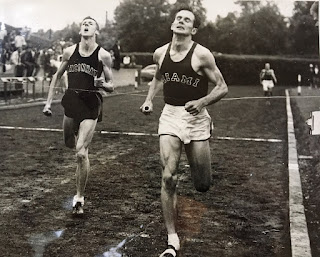 The University school record for the 440-yard dash had lasted 18 years before he bested it. Bob's time of 48.6, during his fourth and last year of eligibility, put him on top of that record board. His own mark remained unbroken for an additional 18 years.

Shoe worn by MacVeigh when he set his UC school record.

In 1951, also at Welcome Stadium in the Ohio AAU Meet, he placed third behind Herb McKenley, the Jamaican 1948 400 meter gold medalist and world record holder. 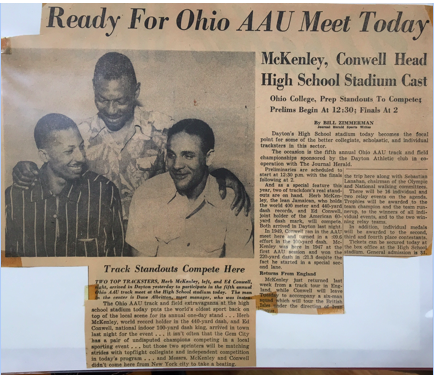 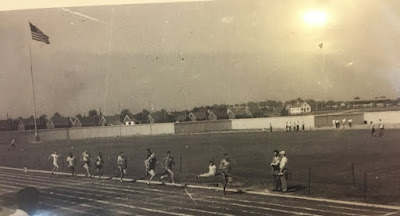 McKenley leading at the 220 mark.  MacVeigh is third.

During the mid 20th century, few individuals ran and trained throughout the year.  Once again, Bob was a contrarian.  He, along with 1949 Hughes High School graduate Don Wahle, who entered UC and joined the Bearcat’s cross-country and track and field teams, established a lifelong friendship through their running. Bob recalls being out for evening workouts with Don – nobody legitimately did this in the early 1950s.  Once a suspicious policeman stopped them and demanded an explanation as to what they were actually up to. 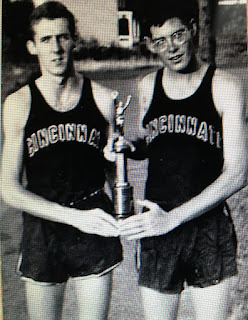 Bob's four years of eligibility to compete for the Bearcats ended in 1951.  Between transferring colleges and performing co-op stints for his business courses, he did not graduate from UC until 1953.

It was estimated earlier that 99.9% of high school runners ceased running upon graduation. If an individual ran in college, he definitely stopped when that concluded.  Not Bob. In 1952 he participated as an open athlete in a number of college meets. Although he had the necessary marks to qualify for the Olympic Trials, he lacked the funds to enable him to travel to the meet in California. With little hope of making the team, he chose not to engage in the Trials.

This inability to go to the Trials did not dull his interest in the sport.  He continued running and competing.  One of the few available local opportunities was the annual Irish Day Meet, which was held each summer at Coney Island.

Upon graduation from UC he began a short-lived career as an accountant, but in September of that year Uncle Sam drafted him into the Army. Bob refers to his two years in the service as a very good period of his life. He met a diverse group of people for the first time and he was able to continue training and competing with the Army track and field team.

Another top athlete on the on the club team was sprinter/hurdler Scott Tyler. Scott was a Hughes High School graduate who in 1958 set the State Record for the 180-yard low hurdles in the District Meet in Cincinnati. His time was 19.0.  After leaving Hughes he attended Miami University. One year he placed second in the NCAA Championships.

It was typical for six to eight athletes, representing the Cincinnati Track Club, to travel to meets in Kentucky, West Virginia, Indiana and elsewhere. Bob’s large automobile provided the transportation and afterwards his wife would type the race results. This was another fond period of his life.

He began working for Federated Department Stores upon leaving the Army. In June of 1960 he was transferred to Boston. Without Bob's guidance, the Cincinnati Track Club disbanded shortly thereafter.

While in Boston, Bob became very involved with the Boston Athletic Association. The BAA is the sponsoring organization for the Boston Marathon. He also became very good friends with Jock Semple, a leader of the BAA.

Mac maintained contact with the few post-college graduates that continued running in the Cincinnati area.  Don Wahle, Howard Hughes, and Kent Friel (all former Bearcats) started up a series of track competitions among themselves, since no other local opportunities existed.  Bob became the fourth member of this group as he mailed in his results.  This humble beginning morphed into the Ohio Valley Games and Summer Meets, which continued for over thirty years. 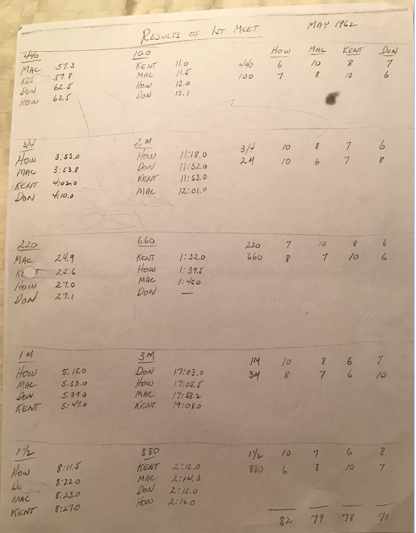 Scoring of races among themselves

Road racing, unlike in the rest of the country, was quite popular in the northeast.  During his time in Massachusetts, Bob concentrated on distance running. He ran the Boston Marathon 11 times. In the 70s MacVeigh helped form the BAA Masters Team and while doing so he began to gravitate back to the shorter distances.  In 1972 he, along with over 40 others, went with a USA master’s team to participate in a number of meets in Europe. It was at this time that he placed eighth in the World Master’s Championship.

After a number of years in Boston, Bob returned to Cincinnati to continue working with Federated in the home office. The Heart Mini Marathon was in the conceptual stage at this time. Bob, with his road racing experiences gained back east, was the logical choice to be the race director for the early editions of the Heart Mini Marathon. His contacts enabled the Heart Mini to bring to Cincinnati notable Boston area runners like Bill Rodgers and Patty Catalano. 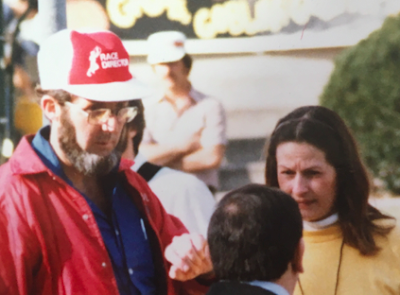 Bob has remained active with the local running scene in a variety of capacities ever since.  He still loves the sport.  Over his career he wasn’t afraid to chart his own unique path.  Many followed his example and our area is richer as a result.

Bob is 87 years old and currently dealing with some medical issues. 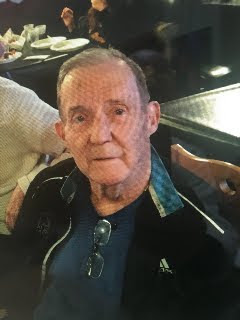