1910s
High school, club, and college competitions did well during the years leading up to America’s entry into World War I.  Indoor facilities, like those in the annex to Music Hall and the Armory on Freeman Avenue helped make indoor track and field to be quite popular.

Indoor
Here is an example of a trophy cup that was won at an indoor meet.  The inscription is the following: 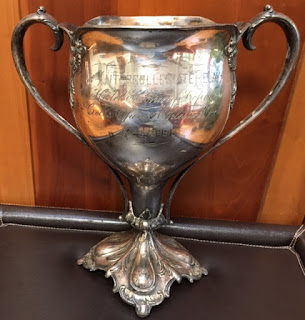 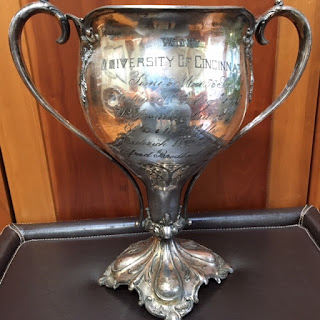 UC
UC competed in an intercollegiate meet against Miami (OH) and Butler University.  Johnson was manager.

Club
The club meets often featured a combination of adult and junior competitions.  While some of the events would seem modern, others would appear quaint or archaic.  The program scheduled for League Park on May 7, 1910 included a 400-yard relay for public school boys, a half-mile interscholastic relay and a “potato race” for up to 16 year olds.  In addition to several events open to all, including fungo long distance hitting, running broad jump and tug of war, the meet also featured a 1-mile open senior relay race for members of athletic clubs, YMCA’s and universities. 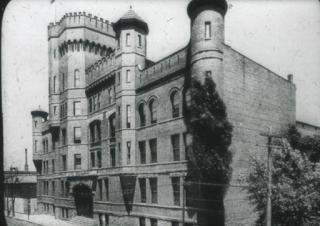 UC’s Track Team Becomes Integrated
Ralph Belsinger, nicknamed "eight stride," became the first African-American track member and athlete in any sport at UC. He would run until 1915. Belsinger anchored relay teams and ran the mile.  After graduating with a degree in education, he taught in the Cincinnati public schools for four decades.
Manager was James W. Pottenger. Barr was Captain. 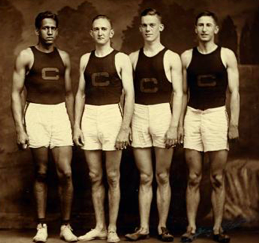 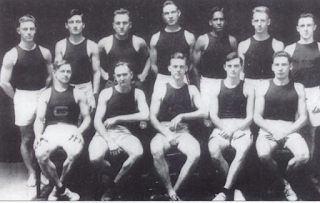 Club
In June the Commercial Club Indiana’s Athletic Committee invited the Gym to send a team to their track meet.  By mid-1911 it was clear that the Gym’s blue and white team was among the best in the nation. Some of the top local meets at the time consisted of:
The First Regiment’s indoor carnival (February)
The Gym’s annual intramural “blue ribbon” meet.
The GCAC’s annual Mid-Summer meet and Carnival of Athletics, the club’s traditional open track and field meet (June) held on their own athletic property.

This last meet was one of the premier meets in the region.  Teams from all over the Midwest attended, including Notre Dame, champions of the Midwest Conference.  More than 300 athletes entered in 1911.  Local athletes represented the University of Cincinnati, Christ Church, Celts, YMCA, First Regiment, and the Friar’s Club as they tried to upend the Gym. They failed to stop the Gym’s juggernaut that more than doubled the score of the second place UC team.

UC
This group was hailed as one of the strongest team in the Midwest. They set nine new state records in the dual meet against Kentucky College. The relay team beat Miami (OH), Ohio State, and Ohio Wesleyan during the Y.M.C.A. Carnival Meet.

Cincinnati finished third in both the Y.M.C.A and the Cincinnati Amateur Athletic Federation (C.A.A.F) meets. UC prevailed over the Gym, 39 to 37, by winning the last event, the pole vault, at the Gym’s annual June carnival.

It was becoming customary for organizations to request reimbursement for travel and lodging expenses when traveling to other meets.

The Gym prepared athletes to attend the Central Olympic Trials. They were held on June 8 in Evanston (Chicago). Selections from three trials sites helped determine the team for the 1912 Games that were to be held in Stockholm.  Those preparing were:
Lovell Draper, long distances
Myron Johnson, 440
Fred Holder, 880
Ed Stephenson, pole vault
Raynor Allen, hurdler, jumps (high, broad, and hop, step, and jump)

The ­Post talked about Lovell Draper as a potential sub 5:00 miler.  Ed Stephenson had vaulted 11’6”, and Raynor Allen had jumped 5’9”.

Another top athlete of the day was Harry Martin, a black sprinter and hurdler who the Post called “the speed marvel of Woodward.”  Martin had allegedly equaled the world’s record for the 50-yard indoor hurdles.  No record could be found regarding their accomplishments at the Trials and no local athlete made the Olympic Team.

1913
1500 rabid fans that cheered for their respective teams, shaking rattles and cowbells, and creating “more than enough noisy encouragement” for the teams, attended the First Regiment Ohio National Guard’s indoor athletic carnival at the Armory.  The top three were the Gym, Ohio State University, and the University of Cincinnati.

The meet was notable for several technological innovations.  Instead of announcing the results by megaphone, results were flashed on a screen using a “stereopticon machine.”  The First Regiment’s planners also installed a telephone line between the playing floor and the locker room area “allowing contestants to rest until the event in which they were entered was ready to be run.”

There is mention of a Memorial Day race from Mt. Lookout to the 7th and Walnut Cincinnati YMCA building.

Due to a late spring flooding, the Gym’s athletic facilities were still covered in mud as of May 31, when the club planned their annual track meet.  It was cancelled and, since this was the only outdoor meet scheduled that year; it was the first time since 1890 that Cincinnati had no athletic meeting.

Amateur sports had disputes between the local organizations and the national Amateur Athletic Union (AAU).  The locals felt that their dues, which they sent to the national organization in New York, did not translate into a commensurate return to them.  In addition, there was talk of disallowing local individuals to compete because they were deemed as professionals (a hot topic after Jim Thorpe lost his two gold medals, which he won at Stockholm, due to playing baseball a few years earlier and earning some money).  William “Dutch” Goebel, a 39’ shot putter and Lovell Draper were investigated. In the end, no one was blacklisted for past actions.

Club
By 1914, the number of athletic clubs in the Greater Cincinnati area was approaching several hundred.  Each fielded teams in one or more sports.  Some were affiliated with the national or regional branches of the AAU and local sports bodies like the Cincinnati Amateur Athletic Federation (CAAF).  Others remained independent and unregulated.  The AAU and the CAAF did manage to bring some order to some of the sports, but they failed to settle amateur athletics as a whole.  Additionally, they had no power to force the various organizations to cooperate financially, which hurt competition locally and limited the development of Cincinnati’s athletes.

Adolph Mathis of the Times-Star complained that there was not a single banked indoor track in Cincinnati.  The indoor meets at the First Regiment Armory were run on flat floors.  Since the First Regiment was understandably reluctant to allow the runners to wear spikes, this led to a lot of slipping and sliding and slow times.  The subject periodically arose, but finances (or lack of) always prevailed.

The Gym’s walking club, established before the turn of the century, reached new heights of.  The club, with 25 members, continued its fall and winter outings during the period.  A typical stroll included a daylong hike.  For most members, walking was a casually uncompetitive avocation.

Club
It was reported that the Cincinnati Amateur Athletic Federation promoted three ‘very successful’ indoor track and field meets and 315 athletes had registered with the CAAF.

During the summer a team of Cincinnati athletes attended a series of meets in the Panama-Pacific Exposition in San Francisco held during July and August. S. Whitcomb, who competed in the high and low hurdles, decathlon star, Fred Stormer, and miler Harry Gardewing were among the contingent.  The Cincinnati team finished seventh overall and Gardewing finished third in the mile.

UC
This could have been considered the best team in history (up to this point), but events were limited due to the war. UC won all the local indoor meets, but lost to Ohio University. No outdoor meets were scheduled.

Coach Alfred “King” Brodbeck, who came from the Cincinnati Gymnasium and Athletic Club (Gym) was there until 1916. He resigned and left for Miami University after apparently some disputes with Dr. Charles William Dabney, the UC President.


V.1  #1     An Abridged Edition of Greater Cincinnati Running During the 20th Century.

V.1  #3    Behind the Scenes Action at the First Heart Mini-Marathon

V.1  #10   Some Notes on the Origin of the Flying Pig Marathon and How It Grew

V.1  #26   Cincinnati’s Indoor Track Palace in the Early Part of the Century